A bunch of flowers in a ceramic vase is displayed on a table. The tablecloth is decorated with flowers and blue stripes that help create a sense of recession into depth.

Like most of Monticelli’s works, this picture is painted on a wood panel, much of which is left visible. Thick paint and blobs of pure colour have been used to suggest the flowers. The painting is similar in style to other still lifes by the artist in the National Gallery’s collection such as Still Life: Oysters, Fish and Still Life: Fruits, which feature the same tablecloth and were probably painted around the same time.

Monticelli was highly regarded by his contemporaries, and was especially influential on Vincent van Gogh, who bought a flower painting by him which resembles this one. Vincent and his brother Theo were involved in publishing the first-ever book on Monticelli.

A bunch of flowers in a ceramic vase is displayed on a table. The flowery tablecloth is decorated with prominent blue stripes which suggest a recession into depth and compensate for the rather flat background.

Like most of Monticelli’s work, this picture is painted on a wood panel, part of which has been left visible and acts as a mid-tone. Thick impastoed paint, typical of his late style, has been used to delineate the flowers and to model their forms as well as describe their colour. The brushstrokes sometimes move in opposite directions, and blobs of pure colour suggest the petals. This painting is related to other Monticelli still lifes in the Gallery’s collection: Still Life: Oysters, Fish and Still Life: Fruits. These pictures feature the same tablecloth and were probably painted about the same time.

Monticelli was highly regarded by his contemporaries, and his long-term friendship with Cézanne is well known and documented. However, it is his influence on Van Gogh which is perhaps most notable. The Dutch painter saw Monticelli’s work for the first time in Paris in 1886. On that occasion he purchased one of his flower pieces, a painting (now in the Van Gogh Museum, Amsterdam) which is very similar to this one. Soon afterwards he went to Provence, where Monticelli had worked, and in 1890 Vincent and his brother Theo were involved in publishing the first-ever book on Monticelli. These experiences proved very important for the evolution of Van Gogh’s unique style and technique.

Although Monticelli’s work tends to be overlooked by scholars today, it seems to have paved the way for the technical and stylistic development of some of the most important Post-Impressionist artists.

This painting previously formed part of a collection belonging to Mr Harry Wearne. It was presented to the Tate in 1939, ten years after Wearne’s death, together with 11 other works by Monticelli. This group of pictures was eventually transferred to the National Gallery in 1956. 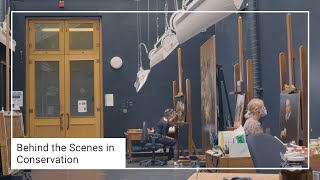 With Van Gogh's iconic 'Sunflowers' back on the wall at the National Gallery, Kristina Mandy gives us an insight into the conservation treatment for a painting by one of his major influences, the artist Adolphe Monticelli.

(Showing 6 of 12 works)
Fountain in a Park
Adolphe Monticelli
A number of costumed figures on horseback and on foot, distributed in different groups in the foreground, are seen beside a fountain near a forest. On the left, four women wearing long dresses seem to be busy chatting and observing the two horsemen next to them. On the right-hand side of the pain...
Not on display
Meeting Place of the Hunt
Adolphe Monticelli
A number of grandly costumed figures are seen beside a fountain in an imaginary garden on the edge of a forest. Two men on horseback coming from the left are approaching a group of women standing in the centre but moved slightly to background. On the right, three other women and a dog are seen in...
Not on display
Still Life: Fruit
Adolphe Monticelli
A wine glass, a flask-shaped carafe, a knife and a plate of fruit are shown on a table, set against a flat dark background. The table is covered by a cloth decorated with flowers and blue stripes that help create a sense of recession into depth.Most of Monticelli’s still life paintings were made...
Not on display
Still Life: Oysters, Fish
Adolphe Monticelli
A drinking glass, a vase, a plate of oysters, some small fish – probably sardines – and a half-peeled lemon lie on a table against a flat dark background. The highly patterned tablecloth is also present in the artist’s Still Life: Fruit and A Vase of Wild Flowers (both in the National Gallery), m...
Not on display
Subject Composition
Adolphe Monticelli
Four women dressed in colourful Renaissance-style costumes are shown standing below what may be a vine. On the reverse of the panel is another image of a standing woman. The exact subject of this picture has not been identified. This is not surprising, since in Monticelli’s late career his techni...
Not on display
Subject Composition
Adolphe Monticelli
Two standing women and a seated dog are seen in what may be a park. The picture perfectly summarises the achievements of the new technique that Monticelli had developed by the mid-1870s. He was applying his paint thickly, varying the strokes in both size and direction, and he also enriched his co...
Not on display
Subject Composition
Adolphe Monticelli
During his stay in Paris in the 1860s Monticelli began to paint fêtes galantes. This term derives from the pictures depicting elegantly dressed men and women, generally placed in a parkland setting and engaged in conversation, that became popular in eighteenth-century France, most often associate...
Not on display
Sunrise
Adolphe Monticelli
A bright yellow sun rises in the centre of the picture, beside a tree. Its vibrant colour stands out against the rest of the composition, which is darker in tone than its companion piece, Sunset, also in the National Gallery’s collection.Both Cézanne and Van Gogh were admirers of Monticelli’s use...
Not on display
Sunset
Adolphe Monticelli
The sun sets roughly in the centre of the picture, behind two tree trunks. The thick yellow paint expands from the sky to the foreground, and Monticelli has applied it using short, directional brushstrokes which allow him better to convey the light. Portions of the wooden panel used as a support...
Not on display
The Hayfield
Adolphe Monticelli
Two peasant women and a child stand on the left, and black and white cart horses on the right. In the background two wagons are fully loaded with hay, and a dog perches on top of the one in the centre. The skyline of a village is shown in the distance.Monticelli made a number of paintings of peas...
On display elsewhere
Conversation Piece
Imitator of Adolphe Monticelli
The specific subject of this picture has not been identified. Four figures that seem to be dressed in costumes of the era of Henry IV, around 1600, are shown busy in conversation.Although the picture is signed at the bottom left corner and it is the type of painting favoured by Monticelli, its au...
Not on display
Torchlight Procession
Imitator of Adolphe Monticelli
Monticelli painted many imaginary scenes of costumed figures throughout his career. Here, a dozen characters are shown in colourful outfits, probably during a torchlight procession. The central figure in white appears to be dressed as Pulcinella, a character from Commedia dell'Arte plays. This su...
Not on display
You've viewed 6 of 12 paintings