Listen to one of the pupil's stories and find out how the teachers used the painting for drama, discussion and creative writing.

A tale of hardship, celebration and tragedy, by a Year 5 pupil at Bonneville Primary School, London – 5 mins

This is a story about a hard-working family, who suffered great hardship and indeed some happiness.

'Bang! Bang!' went the door knocker and all the Le Plats rose in unison from the dinner table. Surely Siriff was not at the door again? The wretched rent collector's last terrifying visit had only been two days earlier.

Monsieur Le Plat hurried to the old, splintered door and opened it a tiny crack. Before Monsieur could say a word, the large fist was thrust through door followed by a drunken, belching 'Bonjour, it is rent day'.

Within seconds, Siriff was in the house pulling open drawers and scouring every corner for any money. The younger boys, Jean, Paul and Sebastian, watched open mouthed, while their elder brother, Pierre, scowled, his eyes filled with hatred.

A while later, the family sat back down to eat their now cold dinner. 'If this continues we will not have a roof above our heads for much longer,' whispered Madame Le Plat.

Early the next morning, the Le Plat family prepared to leave for work at the nearby factory. They all felt extremely lucky to have work when times were so hard, and most of the neighbourhood was unemployed.

There was a clattering of coffee cups, a bustling of bags and a creak of the bathroom door as everyone hurried. At last, Jean, Paul and Sebastian were on the doorstep with Madame. Monsieur bellowed up the stairs, 'Pierre, this is not a morning to lie in bed. You will lose your job!  We will lose the house, shift yourself!' There was silence. Nothing could be heard. Not a sound.

With their heads bowed in confusion, they trudged slowly down the road towards the factory. Suddenly, there was a massive cry from the distance. The Le Plats glanced up and heard that the factory was closed for the day.

'Why?' said the younger boys, but no one replied. The cries had changed, 'The factory is closed!' to a trample of feet as the workers made their way towards the river for the day instead.

Madame Le Plat looked around at her husband, 'Perhaps we should go down to the river.  There is no work that can be done and it is a beautiful day. It would be good to relax and we can look for Pierre.'

At that moment, Pierre's best friend, Debere, rushed past shouting, 'Quick, quick! Get down to the river bank. Get yourself a good position. Pierre is trying to win the Big River Race. He is already in a boat. He is determined to win!'

The Le Plats could not believe what they were hearing. In a daze, they found an untouched spot, adjacent to the river. It wasn't long before Jean, Pierre and Sebastian had stripped off and were enjoying the refreshing feel of the cool river.

Madame sat silently, feeling uncomfortable. She was doing nothing while her home was at risk. Monsieur had given up worrying and just stared out into the clear water. As he was staring, he felt a thump, thump. It was the wagging tale of Pierre's dog, See See, who had just appeared.

As Monsieur stared, he began to daydream. His eyes were slowly dragged towards the couple who were being rowed across the river to watch the race. It suddenly hit him! If Pierre won, he and his wife would be just like them!

While Monsieur was daydreaming, Paul scavenged the river floor for treasure. Everyone's attention was suddenly grasped by the loud bark of See See. Jean looked up and saw the race approaching. He could not believe his eyes. Pierre was in the lead! 'Allez, Pierre, Allez!'

As the family rose to their feet, Jean's shouts were echoed by them. With the finish line in sight, Pierre pulled and pulled, increasing his speed. Within seconds he had won the race. The Big River Race!

That evening, after a day of celebration, Monsieur, Madame and the three younger boys stayed at home feeling happy, safe and secure for the first time in years, meanwhile Pierre went to celebrate with his friends at the local pub.

The following morning, there was no sign of Pierre. The family started off towards the factory. As the family came around a corner they were once again greeted by Debere but this time Debere was like a ghost, withdrawn and pained. Debere's eyes filled with tears as he broke the news. Pierre had an accident by the river. He was dead.

Slowly, the family turned and found their way back to the river where they were so happy the day before. Monsieur lay down and looked out at the river with See See at his back. Madame sat alone, isolated from the family, just staring out at the river. Sebastian sat on the river bank, hating what he saw, while the others splashed about trying to forget.

Back to case study

"Seurat's 'Bathers at Asnières' provided immediate images, contexts and ideas. From the very first exploration of the painting, there was a mass of story possibilities."

"We were able to use the painting as a springboard for exploring other subjects: for example, geography, in which children researched and located Asnières, and history, comparing the scene with what we knew about the Victorians. It also allowed children to make artistic links between paintings, for example, A Sunday Afternoon on La Grande Jatte, also by Georges Seurat."

"The children were able to develop their ideas using a wide range of media, including word processing, sculpture, painting, photography and video. They also used computer editing software to combine their work with music."

"The project started with a visit to the National Gallery to introduce the painting and gain initial responses and story ideas. We built on this in school by exploring the painting using the Gallery's interactive website." 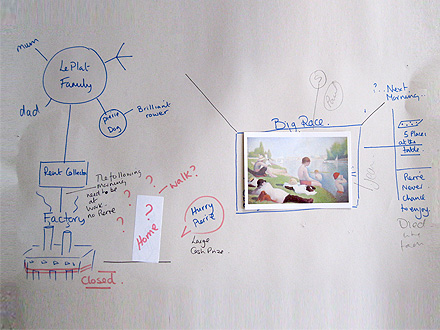 "Painting and drawing with different media helped the students to develop their appreciation of the detail and its relevance to any potential storyline. This included adapting the painting physically to reflect the thoughts and emotions of the characters of their story."

"Through a series of mind mappings, emotion graphs, brainstorming and drama techniques, children developed their own stories based on the painting."

"It was great to see a group of children who had spent so long on a single stimulus still so enthusiastic and creative after five weeks. Many of the individuals who were previously reluctant to write were suddenly engaged in the creative process."

"Talk and drama became the real lead-in to writing and the benefits were evident in raised attainment."