Uncover the symbolism and psychological depth of Lotto’s Renaissance portraits.

Celebrated as one of the greatest portraitists of the Italian Renaissance, Lorenzo Lotto uniquely portrayed a cross section of middle-class sitters, among them clerics, merchants, and humanists.

Lotto depicted men, women, and children in compositions rich in symbolism and imbued with great psychological depth. The prominent addition of objects which hinted at the social status, interests, and aspirations of his subjects added meaning to each work.

With the inclusion of documents that have survived from Lotto’s own account books, this exhibition – the first of its kind in the UK – provides extraordinary insight into the artist’s individualistic style and the people he portrayed.

Exhibition organised by the National Gallery and the Museo Nacional del Prado, Madrid.

'The Mystic Marriage of Saint Catherine with Donor Niccolò Bonghi'

'Portrait of a Woman inspired by Lucretia'

'Portrait of a Man with a Lizard' 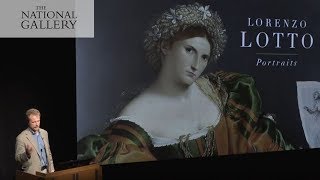 Join Matthias Wivel, our curator of 16th-century Italian paintings and curator of Lorenzo Lotto Portraits, to find out more about the exhibition.