Delacroix’s reputation among avant-garde painters increased after his death, particularly after the publication of his ‘Journal’. Of particular interest to artists were his ideas on the expression of emotion through art and his belief in synaesthesia – the simultaneous reception by the senses of colour, shape, and music. 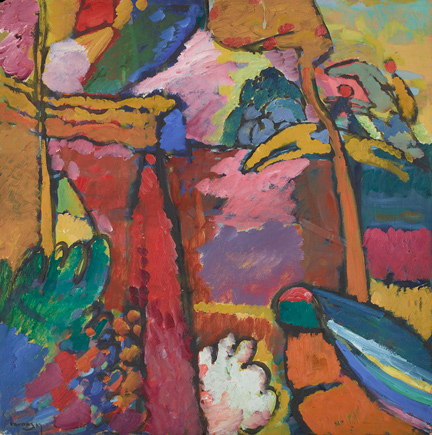 ‘Study for Improvisation V’ of 1910 by Vassily Kandinsky (1866–1944) stops just short of becoming abstract. A veiled woman on the lower right kneels before a standing, Christ-like man with streaming hair. In the upper right, two men on horseback gallop across the landscape, recalling the biblical horsemen of the apocalypse. Kandinsky painted this work in the same year he finished writing ‘Concerning the Spiritual in Art’, one of the key manifestos of early 20th-century modernism. In his call for artists to explore the emotional and spiritual values of pure colour and abstract form, Kandinsky continued an artistic legacy that Delacroix had come to define.