From the glimmer of a jewel to the sheen of armour, Bermejo’s ability to capture light, colours and textures in oil painting was unparalleled in 15th-century Spain.

Though fewer than 20 works by the artist are known and much of his life remains something of a mystery, Bermejo’s paintings set him apart as a technically skilled and visionary master.

Bringing together seven of his rare works, six of which have never been seen in the UK, this exhibition explores how Bermejo drew inspiration from Netherlandish painting, using illusionistic effects and a rich colour palette, to become one of the greatest artists of the Spanish Renaissance.

At the heart of the exhibition is Saint Michael Triumphs over the Devil, widely considered the most important early Spanish painting in Britain. Its technical skill and excellent state of preservation are even clearer following its recent year-long conservation treatment.

This will be a unique opportunity to see Bermejo’s first documented painting, ‘Saint Michael’ alongside his last, the recently restored ‘Desplà Pietà’ (1490) from Barcelona Cathedral, which has never been lent outside of Spain until now. Also on display will be Bermejo’s only other signed masterwork, the 'Triptych of the Virgin of Montserrat' (probably 1470–75) from the Cattedrale Nostra Signora Assunta in Acqui Terme, Alessandria (Italy).

The publication accompanying this exhibition has been supported by

4/4
1
Bartolomé Bermejo
Desplà Pietà
1490
Bermejo’s last documented painting portrays the mourning Virgin cradling the body of Christ. It was commissioned by Lluís Desplà, archdeacon of Barcelona Cathedral (pictured on the right) and has never before left Spain.
Image: Bartolomé Bermejo, 'Desplà Pietà', 1490, Barcelona Cathedral © Catedral de Barcelona (fotógrafo: Guillem F-H)
Bartolomé Bermejo
Saint Michael Triumphs over the Devil
1468
Bermejo's first documented painting portrays the Archangel Michael as a warrior conquering the devil. Recently restored, the work highlights Bermejo’s mastery of the oil painting technique.
Bartolomé Bermejo
Triptych of the Virgin of Montserrat
probably 1470–5
This was painted for the Italian merchant Francesco della Chiesa, who is shown praying to the Virgin. She was called upon to watch over those involved in maritime trade; a large ship sails on the horizon.
Image: Bartolomé Bermejo, 'Triptych of the Virgin of Montserrat', probably 1470–5, Cathedral of Nostra Signora Assunta, Chapter House/ Acqui Terme (Alessandria) / Italy © Diocesi di Acqui-Cattedrale N. Signora Assunta, Acqui Terme / Photo: Museo Nacional del Prado, Madrid
Bartolomé Bermejo
Descent of Christ into Limbo
about 1470–5
This is one of four scenes which formed the predella of an altarpiece. Arranged in sequential order, this is the first in the series and shows Christ’s descent into Limbo to release the souls of the righteous.
Image: Bartolomé Bermejo, 'Descent of Christ into Limbo', about 1470–5, Museu Nacional d'Art de Catalunya, Barcelona. Acquisition, 1914. MNAC 015872 © Museu Nacional d'Art de Catalunya (2019) 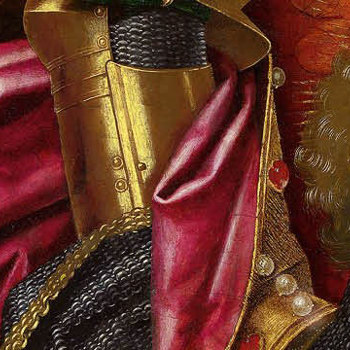 10 things you should know...
about Bartolomé Bermejo
Much of Bermejo's life is shrouded in mystery. Here's what we do know about the 15th-century Spanish genius
Article
Read more 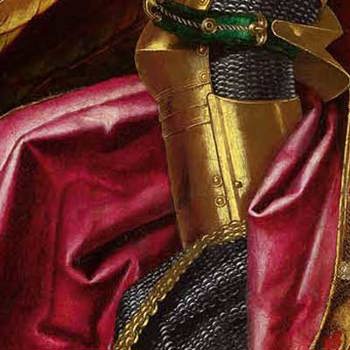 In detail: Saint Michael Triumphs over the Devil
Discover the detail in this extraordinary painting by Bartolomé Bermejo
Article
Read more
X
/
Y
★★★★★
The Telegraph
'Wherever you look, another marvel hits you.'

★★★★★
Evening Standard
‘The devil's in the detail in this small but splendid show.'