Rembrandt’s Self Portrait at the Age of 63, a much-loved work from the National Gallery Collection, is going on tour in January 2016 as the final painting in the three-year Masterpiece Tour.

The Masterpiece Tour is part of the National Gallery’s commitment to promote the understanding, knowledge, and appreciation of Old Master paintings to as wide an audience as possible. This opportunity to bring hugely popular National Gallery paintings to the public’s doorstep is being made possible by the generous support of Christie’s. 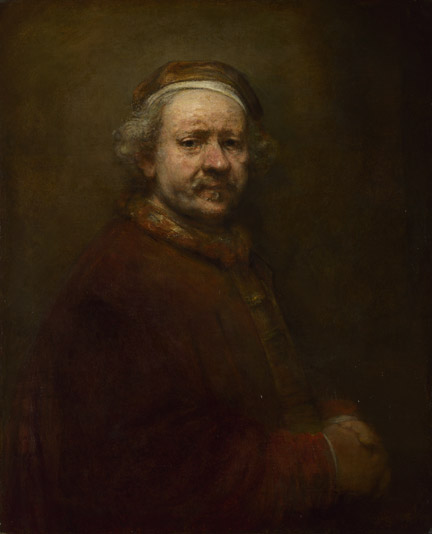 Ulster Museum, Belfast
15 January – 13 March 2016
The first stop on the tour will be the Ulster Museum in Belfast. Located in Belfast’s Botanic Gardens, the Ulster Museum is the largest museum in Northern Ireland. With extensive collections from art, history, and natural sciences, the Museum re-opened in 2009 following a major renovation and won the coveted UK Art Fund prize in 2010. It is renowned for its extensive collection of Irish art and recently completed a major renovation of its Modern History gallery. Rembrandt’s 'Self Portrait at the Age of 63' will be hung alongside a selection of Dutch 17th-century paintings from the Ulster Museum collection.

“We count it a privilege to be one of the host venues for the Masterpiece Tour and are delighted to be displaying Rembrandt’s 'Self Portrait at the Age of 63'. It is an incredible work of art and particularly poignant as it was painted during the last year of Rembrandt’s life. I am sure visitors will be thrilled to see this hugely significant and remarkable painting displayed at the Ulster Museum.”

Abbot Hall, Kendal
19 March – 15 May 2016
The next stop on the tour is Abbot Hall. Situated in the centre of Kendal, Abbot Hall Art Gallery offers a rich mix of art, culture, and history whilst undertaking an annual programme of innovative exhibitions. The Gallery holds many fine examples of 18th- and 19th-century painting, as well as a substantial collection of work by Ruskin. Modern artists include German refugee Kurt Schwitters, who also had a local connection – spending his final years in the area – while contemporary works by Bridget Riley, David Hockney, and Lucian Freud are also shown.

“Abbot Hall Art Gallery is thrilled to have been selected to take part in the National Gallery Masterpiece Tour for 2016. We wait with great anticipation for the arrival of Rembrandt’s magnificent work to Abbot Hall. The loan of this work continues Abbot Hall’s reputation of bringing major works of art to Cumbria and the North West. We will also take this opportunity to show works from our own collection focusing upon portraiture. This will include portraits of Lady Anne Clifford, who was alive at the same time as Rembrandt, and also the monumental 'The Great Picture Triptych' painted in 1646, featuring Lady Anne’s family history and accomplishments.”

“We are delighted to have been selected to host Rembrandt’s 'Self Portrait at the Age of 63' as part of the National Gallery’s Masterpiece Tour 2016. The painting will be a fitting addition to our European Old Masters gallery which will undergo a significant refurbishment in anticipation of the loan. Bristol’s fine art collection holds an international reputation and this prestigious painting will be a fantastic new attraction that will give both residents and visitors to the city the opportunity to enjoy magnificent art in a beautiful setting.”

“The National Gallery was created for the benefit of the British public, but we must recognise that a number of visitors may find it difficult to make the journey to London. We hope that the tour of this great Rembrandt masterpiece will reach people who have never visited their national collection or haven’t done so for a long time, and we hope that many of those whom we do reach will then feel inspired to visit or revisit the collection. We are pleased to include these three venues in the final stage of the Masterpiece Tour 2016 and look forward to seeing the different ways in which this much loved portrait will be displayed in each setting.”

“We strongly believe in the role that art and collecting plays in the world today and in accessibility to art for everyone. We are delighted to have the privilege of supporting the National Gallery’s Masterpiece Tour for the third year running. Christie’s has long supported regional museums and it is rewarding to know we are enabling those outside London to view these national treasures and that the people of Belfast, Kendal and Bristol will enjoy seeing one of Rembrandt’s last great works.”

'Self Portrait at the Age of 63' (1669) by Rembrandt was painted in the final year of Rembrandt's life and is one of his last pictures. He died on 4 October 1669 and was buried in the Westerkerk in Amsterdam. Rembrandt painted more self-portraits than any other artist of the 17th century. The National Gallery has two of them, separated by nearly 30 years. In this late picture, the artist wears a deep red coat and a beret, his hands clasped before him. The viewer is confronted by his steady gaze. Rembrandt painted and etched self-portraits throughout his life, but those executed in his final years, in which he presents himself in a reflective mood, are among the most poignant and challenging. The painting was cleaned in 1967, revealing the damaged signature and date. The X-ray of the picture reveals two 'pentimenti' (alterations to the design). First, a change in the size and colour of the beret, which was originally much larger and all white. Secondly, the original position of the hands was open and he was holding a paintbrush. Repainting the hands clasped and without the brush reduces their dramatic impact and draws attention back to the face. The painting has been in the National Gallery collection since 1851.

The National Gallery is one of the greatest art galleries in the world. Founded by Parliament in 1824, the Gallery houses the nation’s collection of paintings in the Western European tradition from the late 13th to the early 20th century. The collection includes works by Bellini, Cézanne, Degas, Leonardo da Vinci, Monet, Raphael, Rembrandt, Renoir, Rubens, Titian, Turner, Van Dyck, Van Gogh, and Velázquez. The Gallery’s key objectives are to enhance the collection, care for the collection and provide the best possible access to visitors. More at www.nationalgallery.org.uk

Christie’s, the world's leading art business, is a name and place that speaks of extraordinary art, unparalleled service and expertise, as well as international glamour. Founded in 1766 by James Christie, Christie's has since conducted the greatest and most celebrated auctions through the centuries, providing a popular showcase for the unique and the beautiful. Christie’s has worked closely with museums and public art institutions throughout its history and continues to support initiatives which increase public access to works of art. Other major initiatives in the United Kingdom in 2013 include The Arts Council Collection Partnerships supported by Christie’s, sponsorship of 'Houghton Revisited: Masterpieces from the Hermitage' and ongoing work as national sponsor of The Public Catalogue Foundation. More at www.christies.com

Abbot Hall, Kendal
Situated in the centre of Kendal, Abbot Hall Art Gallery offers a rich mix of art, culture and history and holds an outstanding permanent collection and an annual programme of innovative exhibitions. The Gallery holds many fine examples of 18th- and 19th-century painting, as well as a substantial collection of work by Ruskin. Modern artists include German refugee Kurt Schwitters, who also had a local connection – spending his final years in the area – while contemporary works by Bridget Riley, David Hockney, and Lucian Freud are also shown. More at http://www.abbothall.org.uk/

Bristol Museum & Art Gallery
Discover Bristol’s world-class collections, from dinosaurs and gems to magnificent fine art and Egyptian artefacts. Step inside the grand Edwardian Baroque building to explore 20 galleries that tell the story of our world from the beginning of time to the present day. Entry to the museum is free. More at www.bristolmuseums.org.uk