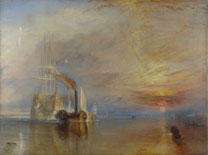 Children from across the United Kingdom will have their work showcased this spring in the biggest Take One Picture exhibition ever to have been organised by the National Gallery, London.

The exhibition features some of the work produced by primary schools this year that responds creatively to the National Gallery painting 'The Fighting Temeraire' by Joseph Mallord William Turner.

The ‘Take One Picture’ scheme invites UK primary schools to use a painting from the National Gallery’s collection as a focus for teaching and learning across the curriculum.

Each year a different National Gallery painting is chosen to provide a starting point for exploration. Hundreds of schools have taken up the challenge since the scheme began in 1995, and many of these submit work to the Take One Picture exhibition each year.

Work from 20 schools will be exhibited in the 2009 exhibition. While some of the schools are new to the ‘Take One Picture’ scheme, others have long embedded this way of working into their yearly planning.

Over 130 schools in total took part in ‘Take One Picture’ this year, with participating pupils ranging in age from those aged just 4 to those aged 11.

Highlights of this year’s exhibition include:

• An art/dance/ICT project culminating in animations of sailors on board HMS Temeraire.

• A three-dimensional representation of the painting made from recycled materials including knitted plastic bags.

• A local area project undertaken by an infant school located close to the final route of the Temeraire.

• A film of children evoking the atmosphere of the painting using model boats, a fish tank, water and theatre lights.

Painted in 1839, 'The Fighting Temeraire' records the final journey of the 98-gun ship as it travelled up the Thames. Work has been selected to demonstrate the wide range of skills, knowledge and understanding that can be gained from taking just one picture as a stimulus.

Research is also currently being undertaken by the National Gallery into the nature of cross-curricular teaching and learning using paintings as a starting point.

Ali Mawle, National Gallery Head of Schools, said, "The Take One Picture approach unites school communities in learning about art and through art. By using a painting as a rich context for developing innovative and cross-curricular units of work, a broad and balanced curriculum is ensured and those involved are engaged and inspired."

The schools represented in the 2009 exhibition are:

As well as the works by the chosen schools a video will be shown representing the efforts of other participating schools.

The ‘Take One Picture’ scheme is generously supported by Mr and Mrs Christoph Henkel and the Dorset Foundation.

More about ‘Take One Picture’

The ‘Take One Picture’ scheme invites UK primary schools to use a painting from the National Gallery’s collection as a focus for teaching and learning across the curriculum. Each year a different National Gallery painting is chosen to provide a starting point for exploration.

This year’s work, together with that from other schools inspired by the same painting, can be seen on the film that accompanies the 2009 exhibition. This is also streamed on the ‘Take One Picture’ website which provides details about the scheme and professional development courses, free downloadable teaching resources, zoomable images, and online exhibitions of children’s work in response to other National Gallery paintings.

About Education at the National Gallery

The collection belongs to the nation and serves a diverse public from the UK and overseas. It is open to all, 361 days of the year, free of charge. Between 4 and 5 million people visit the National Gallery each year. Almost all of the 2,300 paintings in the National Gallery’s collection are on permanent display.

The Education Department was set up about 30 years ago. The varied programmes organised by the department are designed to show how the National Gallery’s collection has the potential for inspiring individual creativity. The National Gallery has a responsibility to everyone, not just those who already understand how to enjoy the collection.

Full title: 'The Fighting Temeraire tugged to her last berth to be broken up', 1839

Turner’s painting pays tribute to the Temeraire’s heroic past. The gunship, painted delicately in light tones, seems to float effortlessly on calm waters, giving it a ghostly appearance. The glorious sunset behind is a fanfare in her honour.

Just as the day is drawing to a close, so too is the life of the Temeraire. The nostalgic and melancholic mood of the painting is emphasised by the fact that the ship can no longer travel by the power of her own sails; they have been furled for the last time and a steamboat tugs her into the shore. Turner paints the two boats in sharp contrast to each other – the steam boat moves ahead of the grand gunship: squat, dirty and ugly in comparison.

The Fighting Temeraire by Turner was chosen above names such as Van Gogh, Hogarth and Hockney to be named the greatest painting in Britain in a public vote in 2005, organised by BBC Radio 4's Today programme in association with the National Gallery, London.

Back to Press Releases