The Portrait of Girolamo Fracastoro, in the National Gallery since 1924, was previously attributed to Titian, but this was regarded as controversial and increasingly doubted. 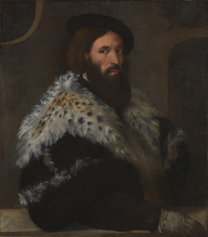 Titian, Portrait of Girolamo Fracastoro, about 1528

The painting received very little attention in the Gallery’s reserve collection until Gallery Restorer Jill Dunkerton and two leading historians, Jennifer Fletcher and Paul Joannides, revealed in a Burlington Magazine article earlier this month that the portrait was indeed a Titian.

When the painting arrived at the Gallery nearly 90 years ago it was in a poor condition — but following removal by Jill Dunkerton of dark varnish layers and repainting dating from the 1840s some of the original quality of the painting has been revealed. Nevertheless, it remains a damaged work.

Girolamo Fracastoro, a celebrated medical doctor, as well as an astronomer, mathematician and poet, proposed the theory of contagion and in 1530 wrote an epic poem that gave the name ‘syphilis’ to the virulent, sexually transmitted disease that was ravaging Italy in that period.

What emerged during conservation treatment was the technical brilliance with which the paint was handled in the best preserved parts of the portrait.

Nicholas Penny, Director of the National Gallery, recently spoke to Guardian journalist Jonathan Jones and points out that the genius of Titian shines out of the painting through the detail of the lynx fur coat: "It's not the head that is so amazing in this picture but the fur.".

Despite this, there are still some mysteries about the painting, not least the awkward architecture in the background, which is much damaged, and the slightly generalised quality of the face. But as Fracastoro was such a busy man Titian may have had to work from the briefest of sittings, or even from another image.

Perhaps the doctor left his lynx-lined coat with the artist, allowing the magnificence of this item, popular among rich Venetians and a favourite study of Titian’s, to take centre stage.

The painting is on display Room 10