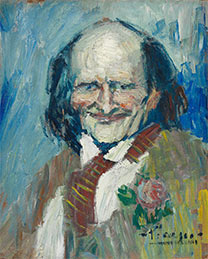 This arresting portrait of Bibi la Purée, a famous reprobate in turn-of-the century Paris, was painted by the 20-year-old Picasso when he returned to Paris in 1901 to prepare his first exhibition in the city at Galerie Vollard.

Bibi la Purée was a picturesque figure in the bohemian circles of Montmartre and the Latin Quarter. A former actor turned vagabond, he was affable and eccentric and survived by shining shoes, stealing umbrellas and drinking absinthe. He occasionally acted as private secretary to the poet Paul Verlaine, who dedicated a sonnet to his friend. Picasso probably met the ragged dandy in the brasseries and seedy bars they both haunted, and would have been fascinated by his elderly, grimacing features. The portrait is brushed in broad, gestural strokes vigorously applied, which capture Bibi’s grin with uncompromising energy. This expressionistic treatment, combined with Picasso’s use of harsh colours, enhances the tramp’s grotesque energy.

The painting has rarely been seen in public. It entered a private French collection in 1939 and has not been lent to any of the major Picasso exhibitions. It has been known in the Picasso literature only by a small black-and-white photograph and the vast majority of Picasso’s admirers will never have seen it ‘in the flesh’. It is on loan to the National Gallery from a private collection.

The painting carries the National Gallery’s important portrait collection into the 20th century and relates to other images of Parisian bohemian and artistic circles in the Gallery by Manet, Degas, Toulouse-Lautrec and Vuillard. It shows how a new, young generation took up the almost violent expressionistic painting style of Van Gogh which was a revelation to Picasso when he arrived in Paris. It is like the clanging of a fire alarm at the end of the painting tradition which the National Gallery traces, announcing the dawn of a new world.

Portrait of Bibi la Purée is now on display in Room 45 of the National Gallery.