Rachel Maclean: The Lion and The Unicorn

A display of film and photographs by artist Rachel Maclean opens at the National Gallery where her themes of national identity will relate to the exhibition Landseer’s The Monarch of the Glen (Room 1, also opening 29 November 2018.) 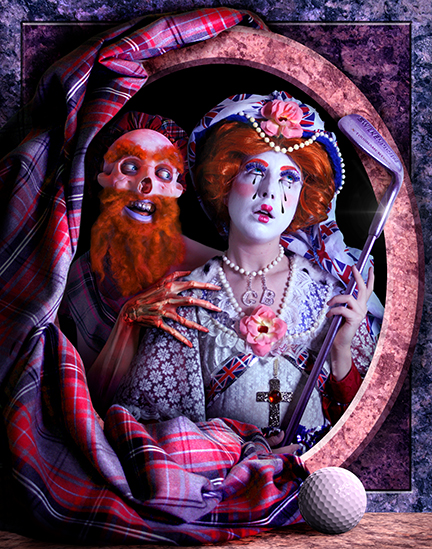 While English artist Edwin Landseer created a romanticized view of the Scottish Highlands, Scottish artist Rachel Maclean uses nostalgic stereotypes to explore how we portray ourselves.

While English artist Edwin Landseer created a romanticized view of the Scottish Highlands, Scottish artist Rachel Maclean uses nostalgic stereotypes to explore how we portray ourselves.

Maclean (1987–) is one of the most sharply satirical artists in Britain today. Using elaborate masks, grotesque prosthetics, and gaudy scenography, her caustic and darkly comical films explore both collective and individual identities.

'Rachel Maclean: The Lion and The Unicorn' features the artist’s 2012 film The Lion and The Unicorn, which shines an irreverent light on Scottish-English relations. Commissioned by Edinburgh Printmakers in the lead-up to the 2014 referendum on Scottish independence, Maclean’s film shows the heraldic attendants of the Royal Coat of Arms, the English lion, and the Scottish unicorn, squabbling over the future of the United Kingdom. Using found audio, including excerpts from The Queen’s 1957 Christmas Broadcast, the artist presents national symbols in a setting of political conflict.

The film is accompanied by a selection of related prints from 2013 showing elaborate, intricately staged scenes conveying exaggerated and dramatic narratives. In her prints as well as ornate filmmaking, Maclean draws on an extensive repertory of art historical allusions, combining traditional iconography and references to pop culture to create cutting-edge satire.

'Rachel Maclean: The Lion and The Unicorn' is the artist’s first display of work at the National Gallery. It follows her exhibition 'Over the Rainbow' which recently ended its run at the National Gallery of Australia. Having exhibited extensively internationally, in 2017, Maclean was selected to represent Scotland+Venice at the Venice Biennale. Her work won the prestigious Margaret Tait Award in 2013 and has been shown at HOME (Manchester); Tate (London); MCA (Chicago); Dublin City Gallery The Hugh Lane (Dublin); Artpace (San Antonio, USA); The Talbot Rice Gallery (Edinburgh); the Royal Scottish Academy (Edinburgh), and as part of the touring British Art Show 8, 2015. She also has, until December 16, an exhibition at the Zabludowicz Collection (London.)

'Rachel Maclean: The Lion and The Unicorn' is part of the Gallery’s Contemporary Programme for 2018–19, that also includes the forthcoming exhibition Sea Star: Sean Scully at the National Gallery (Ground Floor Galleries 13 April – 11 August 2019). The newly enhanced Contemporary Programme will extend the range of artists we work with through exhibitions and residencies.

From winter 2018 onwards, we look forward to welcoming visitors, artists, and scholars to see modern and contemporary art and artists in dialogue with the collection, creating a forum where the art of the present and that of the past is continually explored.

Practising artists have always held a central position at the National Gallery; the collection has provided a source of inspiration for artists from all over the world, from modern masters to acclaimed contemporaries. Contemporary artists who have worked with the National Gallery in the past include Tacita Dean, Chris Ofili, Bridget Riley, Ed Ruscha (whose recent 'Ed Ruscha: Course of Empire' was a response to Thomas Cole’s series of paintings 'The Course of Empire', exhibited contemporaneously in the Gallery’s exhibition 'Thomas Cole: Eden to Empire'), George Shaw, and Alison Watt.

Daniel Herrmann, Curator of Special Projects at the National Gallery, and curator of 'Rachel Maclean: The Lion and the Unicorn', says:

“When the National Gallery opened, two days a week were dedicated to practising artists. Ever since, the Gallery has been at the heart of a thriving community of visitors, critics, and artists – a gallery full of discussion, debate, and delight. We are thrilled to continue this tradition with a new Contemporary Programme. Rachel Maclean is one of Scotland’s most astute artists today, combining an unflinching sense of satire with sincere talent and skill. We are excited to present Rachel Maclean’s works to our contemporary audiences and to show our historic collection and exhibitions in dialogue with artists of today."

Please note the earlier start to this press view with speeches and tour of both 'Rachel Maclean: The Lion and the Unicorn' and 'Landseer’s The Monarch of the Glen' starting at 9.30am.

Please come to the Getty Entrance.