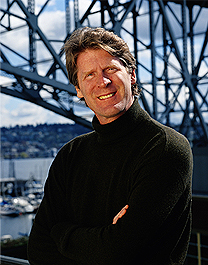 Mark Getty will take over as Chairman from Peter Scott QC, who will cease to be a Trustee of the Gallery on 10 August 2008 after nine years in office. Peter Scott has served as Chairman of the Board since January 2000.

Mark Getty is the co-founder and Chairman of Getty Images, Inc. Previously he worked with Kidder Peabody in New York and then joined Hambros Bank Ltd in London in 1991. Mark Getty is also a non-executive director on the boards of several companies.

I am deeply honoured to accept this appointment at the National Gallery. The Gallery is home to many of Britain’s greatest treasures and its paintings include some of the highest achievements of European art. I am pleased to become Chairman soon after the appointment of a new Director, Dr Nicholas Penny, who has a deep appreciation of those achievements, but also understands that the Gallery needs to adapt to today’s rapidly changing society and engage the next generation. I would like to add my thanks to Peter Scott for his extraordinary dedication to the National Gallery over the last nine years. We shall miss him.

I have worked closely with Peter Scott, both in my capacity as Director and previously as a Curator of the Gallery. He has been a tireless and dedicated Chairman over the last nine years. I am delighted with the appointment of Mark Getty as his successor and greatly look forward to an equally close working relationship with him.

Mark Getty knows the Gallery well, having served on the Board for nine years. His judgement and knowledge are much respected by the Board, and the Gallery will benefit greatly from his experience in an international and competitive field of business.