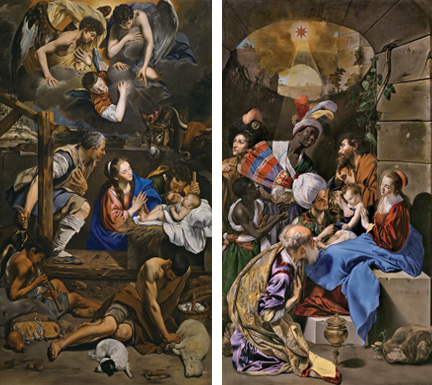 The loan of these two remarkable paintings from the Museo Nacional del Prado, Madrid provides a rare opportunity to present the work of the Spanish painter Fray Juan Bautista Maíno, an artist of exceptional talent whose name remains largely unfamiliar outside Spain.

Maíno’s Adorations: Heaven on Earth will coincide with Beyond Caravaggio, opening on 12 October; the first major exhibition in the UK to explore the influence of Caravaggio on the art of his contemporaries and followers. Maíno’s two Adorations are highly significant in the context of Caravaggio’s extended influence across Europe.

By the age of 23, Maíno had travelled to Rome where he would have seen Caravaggio’s revolutionary paintings in the Contarelli Chapel in the church of San Luigi dei Francesi. Caravaggio’s work clearly left a deep impression on the young Maíno, so much so that he continued to paint in a naturalistic vein with chiaroscuro lighting even after his return to Spain.

The son of a Milanese cloth merchant, Maíno was born in Pastrana, a Spanish town known for its silk trade and production. The two Adorations reveal Maíno’s response to the stylistic tendencies prevalent in early 17th–century Rome, combining the naturalism of Caravaggio with the refined palette of Orazio Gentileschi, as well as the more classicising styles of Annibale Carracci, and Guido Reni.

The two paintings on display, measuring over three metres each in height, originally formed part of a 'retablo' (altarpiece), painted in 1612–14 for the high altar of the Dominican church of San Pedro Mártir in Toledo. The 'retablo' took Maíno three years to complete, despite the initial contract stipulating they were to be painted within eight months. It was while working on the altarpiece that Maíno took religious vows and joined the Dominican Order.

The prominent black and white dog in the foreground of 'The Adoration of the Shepherds' alludes to the Dominicans; the dog being a frequent attribute of Saint Dominic and 'Dominicanus' a play on the Latin words 'Domini canis' (dog of the Lord).'The Adoration of the Kings' demonstrates Maíno’s first-hand knowledge of luxurious fabrics, such as the shimmering violet tunic and gold and silk brocade worn by the king kneeling in the foreground, which was probably gained from his father’s profession as a cloth merchant.

The artist’s possible inclusion of a self-portrait, in the guise of a pilgrim on the far left of the composition pointing towards Christ, suggests a deep personal connection with this commission.

In addition to being Maíno’s greatest works, the two Adorations are also among the earliest Spanish paintings to have been executed in a Caravaggesque style.

"I am thrilled to have the opportunity to display Maíno’s two Adorations in London. Not only are these masterpieces being shown to our visitors for the first time, but I also hope that they will provide an added dimension to the story of Caravaggio’s extended influence across Europe – a subject explored in 'Beyond Caravaggio', an exhibition showing concurrently in the Sainsbury Wing."

“Maíno’s Adorations were painted over four hundred years ago but the brightness of the palette, the variety of people represented and the combination of naturalism and artificiality, give the paintings a surprisingly modern look. Maíno, a friend of Velázquez, deserves to be much better known.”

Publicity images can be obtained from press.ng-london.org.uk.