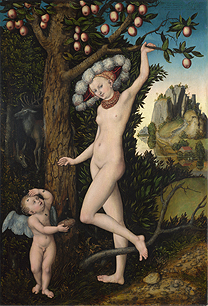 Lucas Cranach the Elder Cupid complaining to Venus, about 1525

In the light of new information, the National Gallery believes that Cupid Complaining to Venus was once part of Adolf Hitler’s private collection.

We are very grateful to Dr Birgit Schwarz, who has been carrying out research on Hitler’s art collecting, for bringing to our attention new information that greatly contributes to our search to fill gaps in the provenance of this painting. The National Gallery believes that Dr Schwarz’s identification of the painting in a photograph of Hitler’s private gallery is correct. The photograph is in an album that is part of Hitler’s former library of 1200 volumes, now in the Library of Congress in Washington. Although Cranach and his workshop made many versions of his compositions, they were rarely exact replicas. The Latin inscription in the National Gallery ‘Cupid Complaining to Venus’ is placed directly against the background, rather than on a white cartellino. This inscription and other distinctive features of the London painting are clearly visible in the photograph.

The National Gallery bought ‘Cupid Complaining to Venus’ in 1963 from the New York dealers E & A Silbermann. This firm stated at the time that it came to them from the sale of the collection of Emil Goldschmidt from Frankfurt – which was auctioned by Rudolph Lepke in Berlin on 27 April 1909. The Cranach painting was listed as Lot 48 at this auction. E & A Silbermann told the National Gallery in 1963 that ‘Cupid Complaining to Venus’ was sold to them by ‘family descendants’ of the buyer at the 1909 auction. Recently the Gallery learnt that the painting was actually acquired in 1945 by Mrs Patricia Lochridge Hartwell (1916–1998), then an American war correspondent in Nazi Germany. A relative of Mrs Hartwell informed the National Gallery that in 1945 she was allowed to take the painting from a warehouse full of art then controlled by US forces in Southern Germany. Mrs Hartwell eventually took the painting back home to the USA.

The provenance gap that now exists is therefore between 1909 and 1945. We also now know that the painting was in Hitler’s possession at some stage during this period. The National Gallery now wishes to establish how and when Cranach’s ‘Cupid complaining to Venus’ came to be in Hitler’s collection. The National Gallery is continuing its investigations to find this out. Any information from the public would be gratefully received.

Part of the Gallery's normal work is to investigate the provenance of its paintings. In light of concerns that some works of art may have been improperly acquired during 1933–45, the National Gallery, along with museums elsewhere, has paid particular attention to the whereabouts of its paintings during those years.

In March 1999 'The Art Newspaper', in cooperation with the National Gallery, published a list of the Gallery’s paintings, the whereabouts of which during all or part of the years 1933 to 1945 was not known. ‘Cupid complaining to Venus’ was included on the list. Since 1999 research has continued, and the list, which can be found on the Gallery’s website, is updated from time to time as new information emerges.