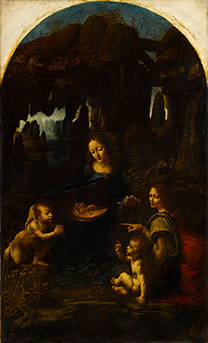 About the ‘Virgin of the Rocks’

The version at the Louvre, which is coming to London, was the first of the two compositions to be painted. Worked on between 1483 and 1486, it was the subject of a dispute about payment with the Milan confraternity which commissioned the work.  The painting is the product of Leonardo’s intense study of the natural world. No landscape quite like it had ever been painted before.

The National Gallery's Virgin of the Rocks was painted for the confraternity as a replacement for the Louvre version, which had probably been sold during the earlier dispute. The work demonstrates a change in Leonardo’s artistic ambitions in the years around 1490. It is a composition of the most artful complexity. Displaying the paintings together will provide a unique opportunity, illuminating the painting career of Leonardo as never before.

The Director of the National Gallery, Dr Nicholas Penny said:
“I am quite sure that the experience of seeing these masterpieces juxtaposed will be one that none of us will ever forget, or that will ever be repeated.”

Following the National Gallery exhibition, there will be another opportunity to see an unprecedented display of Leonardo’s works at the Louvre. The Louvre’s ‘The Virgin and Child with Saint Anne’ will be joined in Paris by the National Gallery’s Burlington House Cartoon on the same subject at the exhibition 'Leonardo da Vinci’s St Anne' (29 March – 25 June 2012).