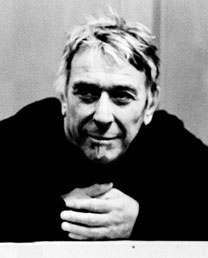 “In any form of art expression, we need to find ourselves working toward a collision of ideas, in order to get where we want to be.”
John Cale

Velvet Underground co-founder John Cale is coming to the National Gallery next month (15 May) to take part in a one-off discussion about the connections between music and art.

Cale is representing Wales at this year’s Venice Biennale, where he will be showing a specially created mixed-media installation. Anticipating this, he will be appearing at the National Gallery in conversation with the Gallery’s Head of Education, Colin Wiggins, where he will discuss his work for Venice and other connections between the worlds of music and art.

The event starts at 10pm, is free of charge, and is part of the National Gallery’s programming for the UK-wide Museums at Night events taking place from 15 to 17 May.

Although Cale’s career has been defined by his reputation as a musician, producer and founder member of the Velvet Underground, he has always been involved in breaking down readily definable categories of the creative arts.

Cale studied music at Goldsmiths College (later the home of the Young British Artists movement) in the early 1960s. He then travelled to the United States, where he met Lou Reed, with whom he formed the Velvet Underground in 1965.

Art has always played a part in Cale’s creative output and during his career he developed and retained a close association with Andy Warhol. In 1990, together with Lou Reed, Cale recorded the critically acclaimed Songs for Drella as a posthumous tribute to Warhol.

John Cale is also closely associated with the Jonathan Richman song ‘Pablo Picasso’, which he produced and later covered. It is therefore fitting that Cale should appear at the National Gallery during the run of its current major exhibition, 'Picasso: Challenging the Past', which will be open until midnight on 15 May as part of Museums at Night celebrations.

There will also be a screening of Henri-George Clouzot’s Le Mystère Picasso, a documentary that records Picasso painting onto a transparent canvas. The unusual, almost surreal, style of the film matches Picasso’s inimitable style of painting, while the combination of Picasso’s seemingly unstoppable creative genius and Clouzot’s direction makes this a mesmerising film.

Other events at the Gallery that evening will include live music and a bar in the Sainsbury Wing Foyer, a guided taster tour of the collection and short art talks.

Museums at Night is funded by the Museums, Libraries and Archives Council (MLA) and organised by Culture24. It links up with the Europe-wide campaign of the same name (La Nuit des Musées) that takes place on Saturday 16 May 2009. Since its inception in France four years ago, the event has grown quickly – in 2008 over 2,200 museums in 40 European countries took part.

John Cale In Conversation is generously funded by the Outset Contemporary Art Fund.

FULL DETAILS OF EVENTS ON 15 MAY AT THE NATIONAL GALLERY

6pm–midnight
Picasso Late
Picasso: Challenging the Past
Exhibition open until midnight as part of Museums at Night celebrations, with live music and bar in the Sainsbury Wing Foyer. Advance tickets: call 0844 2091778 or visit www.nationalgallery.org.uk

6.20–8pm
Bite-size talks
Every 20 mins: Short talks on the ‘big questions’ of art history in 10 minutes or less

Free, no need to book but places available on a first-come first-served basis.

The annual ‘Museums at Night’ takes place during the third weekend in May 2009 (15th– 17th). A national campaign for late night opening across the UK, it seeks to attract people into museums who don’t usually visit, simply by staying open late or by creating special events. It will link up with the Europe-wide campaign of the same name (La Nuit des Musées), which takes place on Saturday 16th May 2009.

Museums at Night 2009 is funded by MLA and organised by Culture24. This year the event is simple: open up your museum or heritage site, at night, and do whatever you want to do. For further information visit www.24hourmuseum.org.uk

Museums at Night Weekend will take place over the weekend Friday 15 – Sunday 17 May; the Europe-wide celebration will be on Saturday 16 May.
Culture24 is a registered charity and not-for-profit online publisher, working across the arts, heritage, education, and tourism sectors.

La Nuit Des Musées was introduced by the French Culture Department to succeed Printemps des Musées and takes place on the Saturday nearest to International Museums Day (18 May). It is now supported by the Council of Europe. In 2008, 2,200 museums in 40 European countries took part. For more information visit www.nuitdesmusees.culture.fr

Museums at Night 2009 has the support of the Association of Independent Museums www.aim-museums.co.uk and the National Museum Director’s Conference www.nationalmuseums.org.uk
START YOUR WEEKEND AT THE NATIONAL GALLERY – LATE NIGHT OPENING MOVES TO FRIDAY

Now you can start your weekend at the National Gallery. As well as exploring the paintings or catching a temporary exhibition, from 6pm you can enjoy guided tours, talks and events. Listen to live music, relax at the bar or have a bite to eat. Or why not draw from a Gallery painting or hear a writer talking about their favourite pictures?

The Gallery is open daily from 10am to 6pm, and from 10am until 9pm every Friday.

From 6pm on Fridays there is live music and a wine bar in the Sainsbury Wing. During the Picasso exhibition the bar is serving tapas, and there is an additional bar and live music in Central Hall.

Free, drop-in events include guided tours, talks, concerts, ‘Talk and Draw’, music inspired by paintings, and writers talking about their favourite paintings. There will also be special bookable events, such as ‘Wine, Nibbles and Talk’. The Belle Shenkman music programme continues in Room 18 on Fridays (6–7pm).

Picasso: Challenging the Past late opening

Sponsored by Credit Suisse
Picasso: Challenging the Past is open, along with the rest of the Gallery, until 9pm on Fridays (last admission 8.15pm).
On Saturday evenings the exhibition will be open from 6pm until 8pm (last admission 7.15pm). The Sainsbury Wing shop will be open. There will be a bar in the SW Foyer and the bakery only in the National Dining Rooms is also open. The rest of the Gallery will close at the usual time of 6pm on Saturdays.

The exhibition runs until 7 June 2009

Room A (lower gallery) opening will remain on Wednesdays, and does not move to Fridays.

The Gallery shops are open on Fridays until 8.45pm. (The Sainsbury Wing shop reopens on 25 February at 10am).

The information desks are open on Fridays until 8.45pm.

For details of talks and events each month, check the What’s On calendar in the Gallery or www.nationalgallery.org.uk
T: 020 7747 2885
E: information@ng-london.org.uk