The National Gallery is pleased to announce that George Shaw has become its ninth Rootstein Hopkins Associate Artist. 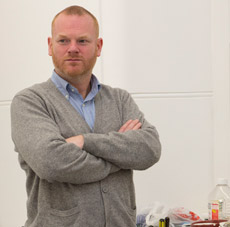 Shaw, who was nominated for the Turner Prize in 2011, is known for his highly detailed approach and suburban subject matter. His favoured medium is Humbrol enamel paints, more usually used to paint model trains and aeroplanes. This gives his work a unique appearance.

Born in Coventry in 1966, Shaw studied at Sheffield Polytechnic and Royal College of Art, London. Shaw’s previous exhibitions have included 'What I did this Summer', 2003-2004, 'Woodsman', 2009 and most recently, 'Neither My Arse Nor My Elbow', 2013 at the Douglas Hyde Gallery, Dublin. Shaw remembers visiting the National Gallery in his youth, arriving early so that other visitors would not dilute the experience. Armed with a sketchbook he would sometimes stop and doodle in front of a work in the collection.

‘When I was offered the chance to be the Associate Artist at the National Gallery I couldn’t believe my luck. I first thought how excited I would have been as a teenager to have been given the chance - and how I probably would have wasted it anyway! I still have my Thames and Hudson book on the National Gallery (345 illustrations 75 in colour!) that my mum gave me for a birthday present in the early eighties.’

‘As a painter you cannot escape the bullying hands and eyes of the great painters. Titian is not a teacher in the way that other painters can be but a mirror in which your own cowardice, hesitation and embarrassment are reflected back. You can’t learn anything from him and yet I always feel I’m on the edge of knowing just a little more. 'The Death of Actaeon' has hypnotized me since I was a teenager.’

Shaw will be making new work that responds to an aspect of the collection, based in a studio in the Gallery. The completed work will be exhibited in mid-2016.

The National Gallery’s collection spans works in the Western European tradition from the early Renaissance to Cézanne. At the time of the Gallery’s foundation in 1824, one of the stated aims was that it should provide a resource from which contemporary artists could learn and gain inspiration. Previous artists have included Paula Rego, Alison Watt and most recently, Michael Landy.

The Rootstein Hopkins Foundation Associate Artist Scheme enables leading contemporary artists to work with a collection of paintings that were made before 1900.

The appointment is by invitation and is for a period of two years. The artist is given a studio in which to make new work that in some way connects to the National Gallery Collection. It is designed to demonstrate the continuing inspiration of the Old Master tradition on today's artists. For more information about the Foundation please visit www.rhfoundation.org.uk

Publicity images can be obtained from http://press.ng-london.org.uk. To obtain a username please contact the National Gallery Press Office on 020 7747 2865 or email press@ng-london.org.uk