This summer the National Gallery displays 51 paintings from a major private collection, most of which have never been seen in the UK before, and are rarely on public view. 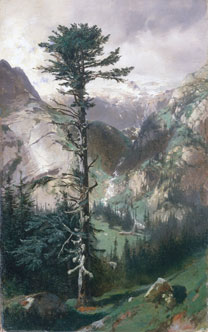 'Forests, Rocks, Torrents' draws on the collection of Asbjørn Lunde, an American who has formed the world’s leading private collection of Norwegian and Swiss landscape paintings, primarily of the 19th century.

British audiences are well aware of the landscape tradition of Constable and Turner. This landmark exhibition introduces skilled and innovative practitioners of this discipline from the same period but from elsewhere in Europe, many of whom enjoyed great reputations during their lifetimes.

The paintings are of two principal kinds: small-scale landscape oil sketches and ‘finished’ paintings, some very large. The works demonstrate the similarities of the Norwegian and Swiss traditions, but also the many differences that climate, character, national temperament and political regimes can impose on art.

The Norwegian landscape tradition can be traced through three artists – Johan Christian Dahl, Thomas Fearnley and Peder Balke. Dahl loved Norway with the passion of a patriot. From the start of his career, he committed himself to depicting his nation, but in 1818 he moved to Dresden and began a long friendship with the German artist Caspar David Friedrich. Soon he became famous among Norwegians as their esteemed master in exile. A pilgrimage to Dresden to learn from Dahl became a necessity for any artist travelling from Norway to Italy. His greatest student was Thomas Fearnley, and it is with this Norwegian master that the Norwegian and Swiss landscape traditions intersect. In 1835, on his return from Italy, Fearnley spent time in Switzerland painting. The show includes three works painted in consecutive months during this period: 'Near Meiringen', 10 June 1835; 'The Mountain Wetterhorn', 18 July 1835; and 'Valley of Lauterbrunnen', 26 August 1835. Two years later Fearnley was in England (his grandfather was a Yorkshireman) painting in London and the Lake District. His visit to the Lake District gave rise to nature studies which still surprise with their originality ('Fisherman at Derwentwater', 2 August 1837).

One of the most extraordinary innovators of the 19th century was Peder Balke – but only now is he re-emerging as a master of Norwegian landscape. His 'Moonlit View of Stockholm', with the spires of the city silhouetted against a stormy night sky, shows the direct influence of Dahl’s views of Dresden. Balke’s scenes of storms at sea and shipwrecks on rocky coasts are for the most part small black and white improvisations, thinly painted on board covered in smooth white ground ('Seascape').

'Forests, Rocks, Torrents' shows how the Norwegian and Swiss landscapes often resemble each other, with their snow-capped peaks, glacial valleys and dense forests. Compare Alexandre Calame’s 'Mountain Torrent before a Storm' and Dahl’s 'The Lower Falls of the Labrofoss'. In the years around 1800, both nations generated traditions of paintings that celebrated the landscape in its sublime and pastoral modes. From the beginning of 18th century artists in Switzerland were thinking about what it was to be Swiss. The first of these was Caspar Wolf, whose personal interests lay in the depiction of rocks, caves and water ('The Geltenbach Falls in the Lauenen Valley with an Ice Bridge').

However, the artist widely regarded as the best Swiss landscapist is Alexandre Calame. His paintings owe much to the work of 17th-century Dutch landscape artists such as Jacob van Ruisdael in their portrayal of mountains, dense fir forests and raging torrents. Calame’s paintings of Lake Lucerne, such as 'Cliffs of Seelisberg, Lake Lucerne', are pervaded with a sense of nature’s grandeur and portray a harsh, majestic environment untouched by man. However, it was the theme of torrents that was central to Calame’s work, including the largest (98 x 138 cm) in the show, 'Mountain Torrent before a Storm'. This painting depicts the longest river in Switzerland, the Aare, and was acquired by Prince Yusupov of Russia.

'Forests, Rocks, Torrents' compares two traditions and asks how two countries – one mired in poverty, dependent on the export of natural resources, without developed cultural institutions, and in political thrall with its Scandinavian neighbours; the other proverbially prosperous, effortlessly cosmopolitan, rapidly industrialising and, for centuries, politically independent – could have arrived more or less simultaneously at the collective realisation that landscape painting was a tool for thinking about themselves and their respective places in the world.

Asbjørn Lunde is the son of Norwegian émigrés to the United States who settled in Staten Island. In 1950 he began practising as a lawyer in New York. Art and music were always important to him and he collects in many different areas: paintings (especially 17th-century French), sculptures, prints and miniatures. In 1968 he started buying Scandinavian paintings, acquiring works by Fearnley and Knud Baade. He is now one of the leading experts and collectors of the landscape painters of 19th century Scandinavia and Switzerland. Nowhere else can Norwegian and Swiss landscape painting be compared so directly and in such depth as in his collection.

Publicity images for 'Forests, Rocks, Torrents' can be obtained from http://press.ng-london.org.uk. To obtain a username please contact the National Gallery Press Office on 020 7747 2865 or e-mail press@ng-london.org.uk

This richly illustrated exhibition catalogue presents Norwegian and Swiss landscape paintings of the 19th century, comparing the two traditions and examining how political events affected their local art movements. The catalogue introduces readers to skilled practitioners of landscape, such as Johan Christian Dahl, Thomas Fearnley, Peder Balke and Alexandre Calame, and this study is supported with a chronology and artist biographies.