“We all paint in Delacroix’s language” – Paul Cézanne

'Delacroix and the Rise of Modern Art', the first major presentation of Delacroix’s art in Britain for more than 50 years, surveys his dynamic career and then moves beyond it, to assess for the first time the influence he exerted for five decades following his death until the early years of the 20th century. 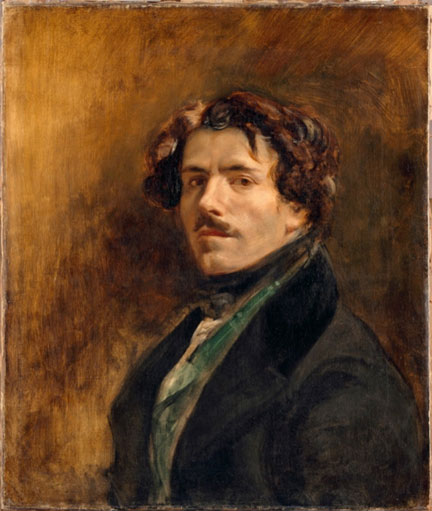 Few artists have had the same impact and lasting influence as Eugène Delacroix. He was the most famous and controversial French painter of the first half of the 19th century and one of the first modern masters. Each new work he exhibited was scrutinised by enthralled contemporaries including Courbet, Chassériau, and the poet and critic Charles Baudelaire. Following Delacroix’s death in 1863, generations of artists continually turned to him to find new directions for their art. Although idolised as a pioneer by artists such as Manet, Cézanne, Renoir, Van Gogh, and Matisse – unlike theirs, his name is not a household one today.

This exhibition will give visitors the opportunity to (re)discover this revolutionary artist. It will include over 60 works borrowed from 30 major public and private collections around the world, including the Musée du Louvre, Musée d’Orsay and the Petit Palais (Paris), the J. Paul Getty Museum (Los Angeles), the Metropolitan Museum of Art (New York), the National Gallery of Art (Washington), and the Van Gogh Museum (Amsterdam).

More than a third of the exhibition comprises a survey of works by Delacroix himself. Highlights include such masterpieces as his 'Self Portrait' of about 1837 (Musée du Louvre, Paris); 'The Convulsionists of Tangiers' of 1838 (Minneapolis Institute of Art); 'The Death of Sardanapalus', 1846 (Philadelphia Museum of Art); 'Bathers' of 1854 (Wadsworth Atheneum Museum of Art, Hartford, Connecticut); and the ferocious 'Lion Hunt' of 1861 (Art Institute of Chicago).

Half the exhibition comprises works by artists of later generations who also fell under the impact of Delacroix’s achievement. Chassériau’s art in particular would not have been possible without the example of the older master. Among the masterpieces are Bazille’s rarely seen 'La Toilette' (Musée Fabre, Montpellier), Van Gogh’s 'Pietà' (after Delacroix)  (Van Gogh Museum, Amsterdam), 'Olive Trees' (Minneapolis Institute of Art), Cézanne’s 'Battle of Love' (National Gallery of Art, Washington), 'Apotheosis of Delacroix' (Musée d’Orsay, Paris), and Matisse’s Study for ‘Luxe, calme et volupté’ (Museum of Modern Art, New York). The exhibition ends with Kandinsky’s 'Study for Improvisation V' of 1910 (Minneapolis Institute of Art), arguing for a direct line of descent extending from the Romantic master to the origins of abstraction.

The complex and rebellious artist whom Baudelaire called ‘a poet in painting’ was the very model of the bohemian, driven by personal vision and unafraid of official opposition. Delacroix is credited with liberating colour and technique from traditional rules and practices, paving the way for new styles of painting. His use of vigorous and expressive brushstrokes, his study of the optical effect of colour, his daring compositions and exotic subjects inspired the Impressionists, Post-Impressionists, Symbolists, and Fauves to push the boundaries of their own creativity. All these admirers saw in Delacroix’s trailblazing vibrancy of colour and vivid portrayal of human emotions the impetus to break the rules and to dare to innovate and experiment with their own work.

“Delacroix was passionately in love with passion, but coldly determined to express passion as clearly as possible" (Baudelaire). One entry in the artist’s diary reads, “I dislike reasonable painting.”

Delacroix caused a sensation on the art scene with his first submission to the Paris Salon in 1822, the monumental 'Barque of Dante' (Musée du Louvre, Paris). It was largely derided, yet was later purchased by the French State. This pattern of widespread condemnation, countered by a vigorous, enlightened support, would continue throughout Delacroix’s life. The painting was later copied by Manet and his version will be seen in the show, as will Renoir’s copy of Delacroix’s 'Jewish Wedding in Morocco' (Worcester Art Museum, Massachusetts). Many young artists began their education by emulating Delacroix.

Delacroix travelled to England in 1825 where he visited the studios of Thomas Lawrence and Richard Parkes Bonington. The colour and handling of English painting influenced his only full-length portrait, the elegant portrait of 'Louis-Auguste Schwiter' of 1826–30 (National Gallery, London). He also started exploring subjects of violence and sensuality, which would prove to be recurrent in his work. His 1827 'The Death of Sardanapalus', even more controversial than the 'Barque of Dante' when first shown at the Salon, is represented here by the 1846 replica (on loan from the Philadelphia Museum of Art), which Delacroix painted for himself when he finally managed to sell the original, large-scale work. It demonstrates how Delacroix effectively combined gruesome fantasy, sensuous beauty, exotic colours, and innovative composition to make a painting both pleasing and shocking.

In 1832 Delacroix travelled to Morocco, and that visit would provide subject matter for many of his future paintings, which would have a profound impact on the work of Renoir, Gauguin, and Matisse. From 1833 Delacroix received numerous commissions to decorate public buildings in Paris, including the Galerie d’Apollon of the Louvre and the Chapelle des Saints-Anges at St Sulpice. The latter is his spiritual testament and was understood by contemporaries to mark a stunning revival of creativity in Delacroix’s final years.

“The opportunity to reintroduce a stunningly original and audacious artist to the British public after far too long makes this an exciting exhibition. But to also show Delacroix as a leader among his contemporaries and a spur to creativity among artists for 50 years after his death – up to the time of Matisse and Kandinsky – reaffirms his central role in the development of modern art.”

“Delacroix is one of the defining painters of the 19th century; trailblazing, passionate, totally committed to his art, and immensely influential. The exhibition explores his achievement and his impact on painters as varied as Van Gogh and Kandinsky.”

Organisation
The exhibition is organised by the Minneapolis Institute of Art and the National Gallery, London.