Courtauld Impressionists: From Manet to Cézanne 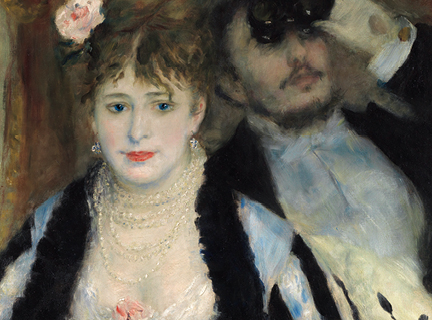 This exhibition of over forty works is centred around the loan of 26 masterpieces from the Courtauld Gallery, which is closing temporarily in September 2018 as part of a major transformation project: Courtauld Connects. With the largest number of works from Courtauld’s private collection ever to be seen at the National Gallery, Courtauld Impressionists: From Manet to Cézanne traces the development of modern French painting from the 1860s to the turn of the 20th century. The exhibition, arranged chronologically in 12 sections - each devoted to a different artist – includes the works of such key figures as Daumier, Manet, Renoir, Cézanne, Seurat, and Bonnard. The exhibition also focuses on the vision, taste, and motivation of Courtauld as he shaped two collections: one for his and his wife’s own enjoyment, and the other for the nation, with equal tenacity and dedication.

These hang alongside major works acquired for the national collection through the Courtauld Fund. This was set up in 1923 by Courtauld himself for the acquisition of modern French paintings and the works that were purchased now form the core of the National Gallery’s post-1800 collection. They include Renoir’s At the Theatre (La Première Sortie) (1876–7); as well as Seurat’s Bathers at Asnières (1884), Cézanne’s Self Portrait (about 1880–1) and Van Gogh’s A Wheatfield with Cypresses (1889) which were the first paintings by these three artists to enter a British public collection.

Courtauld started collecting on a grand scale in the early 1920s after he became chairman of his family firm, one of the world’s most successful synthetic fabric manufacturers. His family, of Huguenot origin, had settled in London at the end of the 17th century as part of a community of French silversmiths and silk weavers.

In 1922 he and his wife Elizabeth made the first purchases of modern paintings for their private collection that eventually grew to more than seventy works. While these works, which today form the core of the Courtauld Gallery’s holdings of French art, are now much-loved, they were frowned upon in Britain at the time. When in 1923 Courtauld started to fund and shape the collection of Impressionist and Post-Impressionist works that are now at the National Gallery, he transformed the representation of modern French art in the UK.

Courtauld’s taste had been shaped by childhood trips to the National Gallery and travels to museums, galleries, and collections on the Continent. Two exhibitions of French Impressionist paintings in London in the late 1910s and 1920s had a profound impact on Courtauld.

On seeing a painting by Cézanne in London in 1922, Courtauld recalled: ‘At that moment I felt the magic, and I have felt it in Cézanne’s work ever since.’ He believed that ‘unfettered imagination, human emotion, and spiritual aspiration go into the creation of all great works, and a share of the same qualities is needed for the reading of them.’ The exhibition shows how Courtauld was dedicated to the transformative power of art and the importance of art history, laying the foundations for the work of the Courtauld Institute of Art and Gallery.

Anne Robbins, Associate Curator of Post–1800 Paintings at the National Gallery and curator of the exhibition, said:

“With masterpieces such as Manet’s great 'A Bar at the Folies-Bergère', Renoir’s 'La Loge (Theatre Box)' and a large group of first-rate Cézannes, this exhibition forms a clear and enjoyable introduction to Impressionism and Post-Impressionism: two of art history’s most essential and best-loved movements. It is also a tribute to Samuel Courtauld who worked tirelessly towards a proper understanding and appreciation of modern painting, with a unique approach to art - both visionary and extraordinarily generous.”

“During the 1920s, Samuel Courtauld played a pioneering role in shaping public taste for Impressionism in the United Kingdom. His philanthropy and vision in establishing The Courtauld in 1932 were grounded in the belief that art was vital for individual fulfilment and the well-being of society. The Courtauld remains dedicated to pursuing that founding vision, which is more relevant than ever.”

“Samuel Courtauld was a trustee and benefactor of the National Gallery as well as the founder of the Courtauld Institute of Art. His important cultural legacy is apparent in both institutions and the exhibition celebrates this with a superb gathering of masterpieces.”

This exhibition is a collaboration between the National Gallery and the Courtauld Gallery.

For advance tickets to Courtauld Impressionists: From Manet to Cézanne, please visit nationalgallery.org.uk or call 0800 912 6958 (booking fee). You can also book tickets in person from the Gallery. Overseas customers can contact us by dialling +44 020 7126 5573. Book online and save.

The Courtauld Gallery
The Courtauld Gallery is one of London’s must-see art museums, home to a collection of art and decorative objects that date from the early Renaissance to the 20th century. It is renowned for its unrivalled Impressionist and Post-Impressionist paintings, including masterpieces by Monet, Van Gogh, and Gauguin and the largest collection of Cézannes in the UK. It houses a major collection of Old Master paintings and is one of the few museums in the country to display such a rich selection of early 20th-century art.

The Courtauld is also home to the world’s leading centre for the study of art history, conservation, and curating - The Courtauld Institute of Art, part of London University. Offering a range of specialist degree programmes and a team of acclaimed academic staff, many of The Courtauld’s alumni have gone on to hold senior positions in the art and business worlds both nationally and internationally.

The Courtauld Galley is currently undergoing a major, multi-million-pound project known at Courtauld Connects which will transform the building, improving accessibility and strengthening the connections between the academic and exhibition spaces. It is the biggest development programme since The Courtauld Institute of Art moved to Somerset House in 1989. Supported by the Heritage Lottery Fund, it will enable The Courtauld significantly to improve teaching and research facilities, enhance the Gallery, and widen and expand their reach to audiences worldwide.

The project involves two phases: phase one will start in September 2018 and will improve The Courtauld Gallery’s visitor experience; phase two of the project will start in 2020 and will focus on improving facilities and experience for students, staff and visitors.