”As a child, there was not a major museum or art gallery in London I didn’t know, and the National Gallery was my favourite.” (Brian Sewell interviewed in 'The Daily Telegraph', June 2012)

The legendary 'Evening Standard' art critic would often talk about the weekly visits he made to the National Gallery as a child imbuing him with his love of art, indeed he once quipped “I’m leaving my body to science, and if there’s anything left, they can burn it, mix the ashes with bird food and scatter them on the steps of the National Gallery.” ('Mail on Sunday', April 2014)

Therefore it is fitting that a much-loved work from his private art collection will today (Thursday 17 November 2016) go on display in the National Gallery, presented as a gift to the Gallery following his death in September 2015.

Maternal Affection is a small (43.5 x 34.5 cm) oil on copper work from 1773 by the French artist Louis-Jean-François Lagrenée. It can be viewed in Room 33 from this morning, alongside works by fellow French painters such as Fragonard, Vernet, and Watteau. 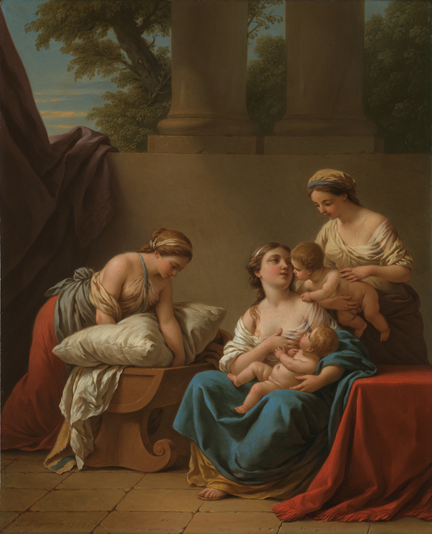 The subject of 'Maternal Affection' cannot be precisely identified.  It takes place in a loggia and shows a woman nursing a child, with another infant held towards her by one of her female companions. Another woman is placing (or removing) bedding in the form of a pillow in or from a wooden crib. In this picture of quiet contentment Lagrenée has sought balance – balance in the colours of the costumes both of, and between, the individual figures, and balance in composition. 'Maternal Affection' is highly typical of the small-scale paintings that the artist made for private collectors.

There are currently 11 paintings by Lagrenée in Great Britain: seven at Stourhead (National Trust) and four at the Bowes Museum, Barnard Castle - therefore 'Maternal Affection' is the only one by the artist on public display in a national collection.

Eighteenth-century French paintings are sparsely represented in Trafalgar Square, and this generous gift helps to extend our collection in this area. 'Maternal Affection' also adds to our understanding of the reception of 17th-century Bolognese painting in 18th-century Europe - Lagrenée’s style was greatly influenced by his admiration of the great Bolognese painters of the previous century, in particular the work of Guido Reni.

“The painting is a beautifully preserved oil on copper of exquisite refinement which allows the National Gallery for the first time to show the work of an artist who was hugely admired by the most discriminating connoisseurs and collectors of contemporary French art, both French and foreign, in the final decades of the 18th century.”

“Brian Sewell had a profound love for the National Gallery as well as a connoisseur's passion for lesser known masters, so it is especially pleasing that Lagrenée's beautiful and refined 'Maternal Affection' which he owned has come to the Gallery as a gift from his estate.”

'Maternal Affection' can now be seen in Room 33 of the National Gallery hanging alongside other French 18th-century paintings by artists such as Boucher, Vigée Le Brun, Boilly, Nattier, Detroy, and Vernet.

Louis-Jean-François Lagrenée (born Paris 1724 – died 1805) enjoyed considerable success during his life time, principally as a painter of mythologies, allegorical subjects, and subjects drawn from history, ancient and modern. His output was prolific, and he received a number of royal commissions. He was a pupil of Carle van Loo (1705–1765) who would later become Premier Peintre du Roi. In 1749 Lagrenée was awarded the prestigious Prix de Rome, and in 1755 he was admitted as a member of the Académie Royale de Peinture et de Sculpture and exhibited at every Salon until the Revolution – except for 1761, when he was in St Petersburg as Director of the Académie des Beaux-Arts at the invitation of the Empress Elizabeth. From 1781 until 1785 Lagrenée was the Director of the Académie de France in Rome and in 1804 he was appointed Curator-Director of the Louvre.