Today the National Gallery has revealed that its recently acquired self portrait by Artemisia Gentileschi went on display at HMP Prison Send; the first time that a painting from a UK national collection has been presented in a prison. It is the latest venue of a nationwide tour that has seen the picture visit a Yorkshire GP surgery, a Newcastle high school, and Glasgow Women’s Library.

The rare self portrait by the celebrated artist of the Italian Baroque, Self Portrait as Saint Catherine of Alexandria (about 1615–17) was on display in the Surrey prison from Monday 20 May until Wednesday 22 May. 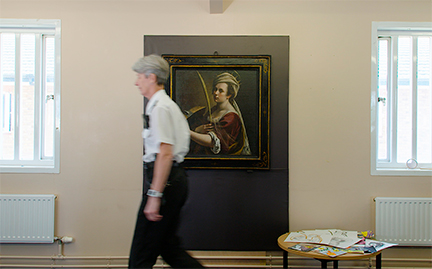 During this time a National Gallery artist educator delivered three workshops for up to thirty women prisoners.Taking place in front of the painting, the workshops involved learning about the painting and the artist, as well as the women prisoners taking part in a range of creative exercises, inspired by themes found in Artemisia’s self portrait.

The National Gallery has also donated several books on art subjects, including the Baroque and self portraiture, to help develop the art reference collection of HMP Send Library. These were delivered by the Director of the National Gallery, Dr Gabriele Finaldi, to mark the beginning of the visit and the Gallery hopes to continue this partnership in the future.

While it is the first time that an Old Master painting from a national collection in the UK has been displayed at a prison, the Watts Gallery (based in Compton near Guildford) has been running an arts programme – The Big Issues Project – for over ten years at HMP Send. This project has demonstrated the positive impact that art can have on women prisoners. In placing the painting at HMP Send, the National Gallery was delighted to work closely with the charity Koestler Arts, which encourages people in the criminal justice system to change their lives through involvement with arts.

The impact of arts and culture in the criminal justice system, and whether this can help with rehabilitation, is an area that is currently being explored. Public Health England has found that 65% of women in prison suffer from depression and high rates of post-traumatic stress have been recorded. Just last year the Arts Council released a report looking at the current research into this topic and what positive social outcomes can be explored through creative engagement. This included focusing on the impact the arts in prison settings can have on offender behaviour and the social climate.

Artemisia’s final visit will be a stop on the E17 Art Trail as part of its Waltham Forest London Borough of Culture 2019 celebrations.

“We are committed to reducing reoffending and supporting rehabilitation. The arts can play a huge role in achieving these goals.We have seen through the Watts Gallery’s partnership with Send, how learning about and practicing art first-hand can support rehabilitation - enhancing confidence, self-esteem and critical thinking skills.It is skills like these that will help offenders turn away from crime and reintegrate successfully into society on release.I fully support this initiative by the National Gallery to deliver workshops and bring important artwork inside the prison gates for all to see.”

"It is unprecedented for the National Gallery to take a great painting into a prison but this tour is turning out to be exceptional in many ways. HMP Send has a remarkable arts programme and we have been very pleased to work closely with them in delivering several special workshops for women prisoners there while Artemisia was visiting.”

“Since 2008 Watts Gallery Trust has worked in partnership with the Michael Varah Memorial Fund and HMP Send to deliver a creative social enterprise programme at HMP Send for women offenders serving life sentences, inspired by the Art for All community art practice of Mary Seton Watts in the 19th century that offered art and craft education and enterprise to support people’s rehabilitation from poverty, illness, isolation, unemployment and crime.

It was a fantastic opportunity for the women at HMP Send with whom Watts Gallery Trust works, to be invited to take part in the National Gallery’s project. This was an exemplar of excellence in museum and gallery education practice and of Art for All - a reminder of the value of providing access to museum and gallery collections and the impact that seeing and engaging with original works of art can have on individuals. Congratulations to the National Gallery for this inspiring initiative.”

Artemisia Gentileschi is considered one of the most accomplished painters among the followers of Caravaggio, whom she may have known personally through her father, Orazio. In an era when female artists were not easily accepted, she was the first woman to become a member of the Accademia del Disegno in Florence and had a truly international clientele, including royalty.

Artemisia faced challenges in both her professional and personal life: she was raped by a fellow painter and was subjected to gruelling questioning and physical torture during the trial that ensued. Her biography has long overshadowed her artistic achievements, but today she is recognised as one of the most talented painters of her generation.

Self Portrait as Saint Catherine of Alexandria shows a female figure turning towards the viewer. A halo is visible just above her head, indicating that she is a saint. Her left hand rests on the top of a broken spiked wheel; a symbol associated with Saint Catherine of Alexandria, a Christian saint martyred in the early 4th century AD. Sentenced to death by the Emperor Maxentius, Catherine was bound to revolving wheels studded with iron spikes and nails. She escaped this instrument of torture through heavenly intervention, but was later beheaded. Of the sixty or so paintings attributed to Artemisia, many feature a strong female hero as their main protagonist. Artemisia’s paintings have often been read as autobiographical and there can be little doubt that her personal identity is closely intertwined with her artistic production.

Throughout spring and summer 2019, Artemisia’s painting – acquired by the National Gallery, London in July 2018 – has undertaken a series of ‘visits’ to unusual and unexpected venues across the UK. The tour started at Glasgow Women’s Library (6–19 March) for International Women’s Day, followed by Pocklington GP Practice (29 April – 11 May) and Sacred Heart Catholic High School in Newcastle (14–17 May).

The National Gallery has also produced an accompanying film following the visit to HMP Send which you can view here.

With additional support from: