One of the founding principles of the National Gallery was to provide a source of inspiration and study for artists. The National Gallery has an ongoing programme of exhibitions and displays which show the work of modern and contemporary artists that arouses curiosity and invites comparisons with its collection.

This summer a new display Art in Dialogue: Duccio | Caro brings together two works of art made almost 700 years apart: 'The Annunciation' by the Sienese painter Duccio (active 1278–1319), and 'Duccio Variations No. 3' by one of the greatest British sculptors of his generation: Sir Anthony Caro OM, RA (1924–2013). This is a creative dialogue, and each work of art changes our experience of the other. These two works have never been seen together before. 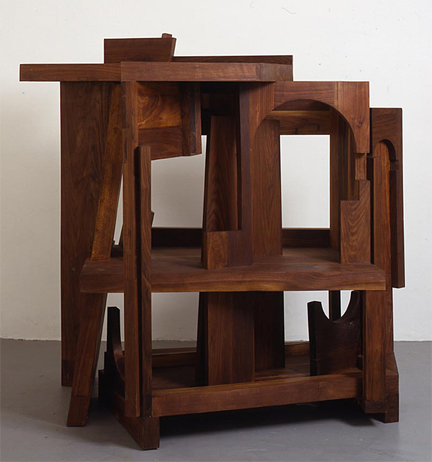 Anthony Caro, Duccio Variations No.3, 1999-2000
On loan with permission from the Caro family.

This display will be on show during the second anniversary of Caro’s death and has the full support of his family. It was a project close to the heart of Caro’s wife, the painter Sheila Girling, who died earlier this year. It is an important tribute to Caro’s life and work.

Duccio di Buoninsegna, one of the transformative figures of Western art, painted 'The Annunciation' sometime between 1307 and 1311, in Siena. It was made as part of a double-sided altarpiece for the high altar of Siena Cathedral. The 'Annunciation', which represents the Archangel Gabriel’s appearance to the Virgin Mary announcing that she will bear the son of God, was the first in a sequence of small pictures on the lower level of the altarpiece’s front panel. 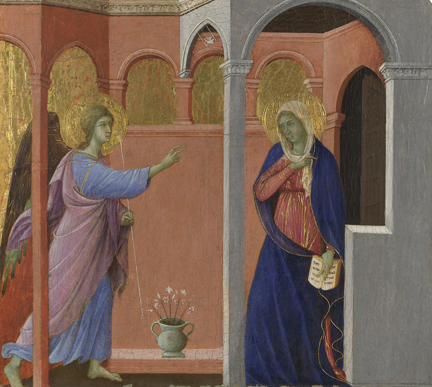 Caro’s decision to make work in relation to Duccio’s 'Annunciation' was the result of an invitation from the National Gallery in 1999 to respond to one painting in the collection for an exhibition called 'Encounters - New Art from Old' (14 June–17 September 2000). The National Gallery invited 24 major contemporary artists to create a new work inspired by paintings in the collection as part of its millennium celebrations. 'Encounters' surveyed the history of dialogue between contemporary art and the art of the past, and placed in context the group of works specially created for this exhibition. These included paintings, drawings, sculpture, photography, and video.

Juxtaposed together for the first time, the two works are in active dialogue with each other. Both play with space, movement, and architecture. They challenge the viewer and invite exploration. While Caro’s sculpture functions as a gateway to re-examining Duccio in a new light, Duccio’s 'Annunciation' was a starting point for something new and yet recognisably ‘Caro’.

'The Annunciation', with its spatial and architectural uncertainties, has many affinities with Caro’s preoccupations. Sir Anthony Caro had a strong interest in Italian paintings of the 14th and 15th centuries and in the roles played by architecture in them and how it affects the viewing process. Architecture within paintings has often been treated as a passive background or as subordinate to the figures but in fact architecture underpinned many paintings, and was used to design the whole picture from the very start, and could also be designed to tell a story: articulating the plot, deepening our understanding of the narrative, and helping us to engage with the events. In Duccio’s painting, a porch frames the Virgin Mary, suggesting her separation from the world as well as her immaculate purity. Caro was deeply moved by Duccio’s tender depiction of the meeting of the Archangel Gabriel and the Virgin Mary, writing at the time that it "emanates feelings of love. It’s a delicate picture, very still."

Caro made not one, but seven sculptures in late 1999 and early 2000 which took the Annunciation as their starting point. Later he wrote: "What I saw in it was an image that interested me first and foremost in terms of its being so architectural." The painting was "the taking-off point, like the original theme in a set of musical variations." Each of his seven variations are supposed to be viewed from the front – as if the viewer’s access is controlled, rather as it would be in a picture.

The figures of Gabriel and Mary are absent from all of Caro’s Duccio Variations – at least in a literal sense. However, the first variation, made in steel and wood, is the most representational, as it shows an interior of interlocking doors and windows, with a bowl in the foreground. For Caro, this sculpture flowed seamlessly from his experience of the painting. The doors and windows mirror the interaction of Mary, Gabriel, the Holy Spirit, and the implied presence of Christ in Mary’s womb. Each subsequent sculpture starts from its predecessor.

One of the key choices for 'Duccio Variations No. 3' was the decision to carve the sculpture in walnut. Caro found wood less easy to use than steel or perspex, and employed it sparingly. The choice of wood here may have been influenced by the fact that the 'Annunciation' is painted on a wooden panel. The space that Caro presents us with is intentionally confusing. It resembles a box, or cabinet, open to our gaze, to which further arches have been attached. It is hard to know how to navigate this space: is it from inside or from outside? The viewer’s confusion is magnified by the merging of figure and architecture. Whilst verticals and arches mimic the painting’s architecture, a diagonal line reproduces Gabriel’s dynamic stance.

"Anthony Caro’s sculpture juxtaposed with Duccio’s painting has the curious and exciting effect of altering our understanding of both artists. Caro takes something from Duccio and gives something back."

Organisation
'Art in Dialogue: Duccio | Caro' is organised by the National Gallery, London.
In partnership with the NewArtCentre, Roche Court