6,000 additional tickets are now on sale for the critically acclaimed National Gallery exhibition, 'Rembrandt: The Late Works', sponsored by Shell. 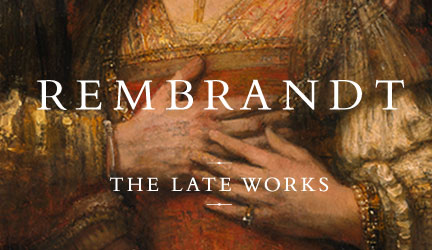 The landmark exhibition – which The Times, The Daily Telegraph, The Independent, The Financial Times, The Guardian, The Evening Standard and The Mail on Sunday, to name but a few, all awarded the maximum 5-stars – will now stay open until 9pm every Sunday*. Rembrandt Lates start on 14 December, and continue until the exhibition closes on 18 January 2015.

“Rembrandt is proving to be one of our most popular exhibitions so we want to offer people every chance to see this show - therefore we will be opening for Rembrandt Lates on Sunday evenings from 14 December. There are also a number of evening and breakfast viewings for Members and discussions are underway about other possible late openings.”

'Rembrandt: The Late Works' is the first ever in-depth exploration of Rembrandt’s final years of painting. That period of his life was turbulent and marked with controversy, but it was also when he produced some of his most soulful, deeply moving and strikingly modern works.

Having already suffered the early loss of his wife and three of their children, Rembrandt’s later years were burdened with bankruptcy, acrimonious legal proceedings with a former lover, and the loss of his common-law wife and only remaining son. However, far from diminishing as he aged, Rembrandt’s creativity gathered new energy.

From the 1650s until his death in 1669, Rembrandt pursued an artistic style that was expressive and radical. His bold manipulation of printing and painting techniques and progressive interpretations of traditional subjects inspired generations of artists, earning him a reputation as the greatest master of the Dutch Golden Age.

Through famous masterpieces and rare drawings and prints, 'Rembrandt: The Late Works' examines the themes that preoccupied Rembrandt as he grew older: self-scrutiny, experimentation, light, observation of everyday life and even other artists’ works; as well as expressions of intimacy, contemplation, conflict and reconciliation.

'Rembrandt: The Late Works' features more than 30 paintings, 20 drawings and 30 prints - each undisputedly by the master himself. Private and institutional lenders have proved exceptionally generous with outstanding loans from collections across the world.

There is also a chance to see 'Rembrandt: The Late Works' in cinemas as part of the second season of EXHIBITION ON SCREEN.

Filmed exclusively for the big screen in high definition, the film will feature interviews with the show’s curator Betsy Wieseman and Jonathan Bikker, Curator of Research at the Rijksmuseum. Artist Richard Twose will demonstrate Rembrandt’s painting technique whilst Dolores De Sade will show the revolutionary way that Rembrandt worked with the printmaking, a brand new art form at the time. Philosopher AC Grayling will provide insight into Rembrandt’s self-portraits.

The film is released in the UK from today (2 December) and globally in around 40 countries from 17 February.

*Please note: only 'Rembrandt: The Late Works' and National Dining Rooms will remain open on Sunday evenings. The rest of the National Gallery premises will close as usual at 6pm.

The above ticket prices include a voluntary donation to the National Gallery. Prices excluding voluntary donation are: Adult £16, Senior (60) £14, Job Seeker/Student/National Art Pass £8, Under 12’s - Free with a paying ticket holder

EXHIBITION ON SCREEN is a series of cinema events that bring the world’s greatest art collections and blockbuster exhibitions to cinemas around the world. Filmed exclusively for the big screen, the films offer audiences a private, guided tour through the exhibition including behind the scenes access, interviews with experts and the chance to enjoy priceless works of art in stunning high definition. For more information visit www.exhibitiononscreen.com