Sounds of the Gallery

Chris Watson is one of the world’s leading wildlife and natural sound recordists. His numerous television credits include David Attenborough’s The Life of Birds, which won the BAFTA Award for Best Factual Sound 1998. Watson has released several albums on the label Touch. 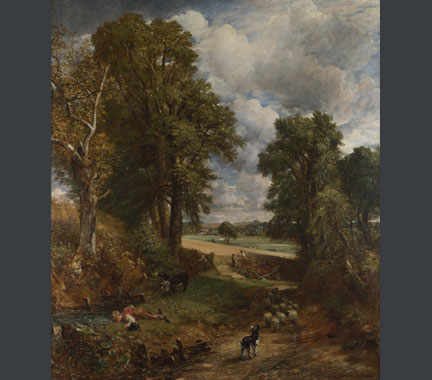 ‘Gazing through the woodland and out into the cornfield creates for me a wonderful and seductive sense of perspective. The mature trees frame a pastoral scene, which is in turn bridged by clouds.

I can hear birdsong billowing out from the leaf cover and a great spotted woodpecker drumming on the trunk of a skeletal tree, which temporarily distracts the Border collie from its herding duties. Unseen and almost unheard a freshwater spring bubbles into the drinking pool, a resource that is shared by animals and people alike on days such as this. Above, a gusting breeze ripples through the tree canopy and out across the open fields where ripe corn heads swish and sigh on dry stems, their slow rhythm accompanying a skylark singing from high above, a pin point of silver sound lost to all sight, in a pewter sky.

In the early 19th century Constable could not only see into the distance but also hear it. From his memory no doubt the warm song of a yellowhammer and drifting tones of the church clock would carry far in the humid air. Noise pollution was yet to reach rural Suffolk revealing a quality of sound that has, like the landscape, passed into history.’