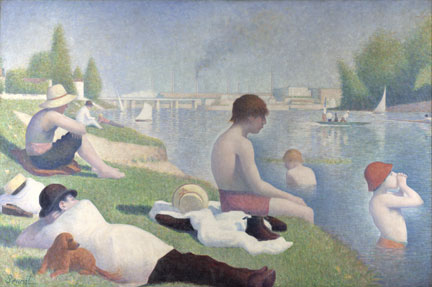 Ben Johnson: I’m not going to talk about what makes this painting so important and the major part of the painting, which are the figures in the foreground. I want to take your eye back... I want it to go to the horizon and I want you to look at the buildings that are portrayed there. They’re very pale, they’re very quiet, they’re very controlled and organised. And what interests me about [Georges] Seurat is not only his sensitivity and awareness of aerial perspective, where things in the distance become quieter and softer and less contrasted in colour and tone. But I want to go back there because this is the mind of a well-organised person who is coming to terms with the construction of a painting. This is the person that developed the idea of pointillism – and where did that idea come from?

Pointillism is this great economy of use of colour, where two colours – often complimentary – can be put close to each other and between them is a negative, quiet space. And in the quiet space, the eye will allow those two colours to come together to form a third colour. And this third colour will be more luminous than the pigment that’s on the canvas. This is the mind of a scientific personality, or a controlling personality. And all artists are manipulative and controlling; they want to manipulate and control the environment they find in front of them, which is their canvas and their paint.

What we’ve also got here is a man who learnt about colour... not through other painters, not through the academies but by looking at the world of tapestries. And in the world of tapestries, they’re very expensive objects to make. A huge amount of craft goes into them, but also, the more colours you put in, the more expensive that tapestry will be. And the tapestry makers were being encouraged over and over again by their commissioners:

‘Isn’t there any way that you can reduce our bill?’

‘We can only reduce your bill if we reduce the number of colours we use.’

And what did they do? They started optical colour-mixing; they started pointillism before Seurat started pointillism. And he [Seurat] came along; he looked at these wonderful, rich paintings... these rich tapestries, these rich, visual objects... [he] was astonished by the amount of colour. But by going through a process of analysis, [Seurat] realised that the thousands of colours he was seeing were perhaps only in the small hundreds, or even less than a hundred. Here we have somebody working in their studio, concerned with the advancement of the position of painting in the 19th century and where does he look? He looks wherever he has to; he borrows, begs and steals from the environment in which he finds himself to go forward as a painter.

Ben Johnson looks at Seurat's use of aerial perspective and discovers a well-organised mind at work. Find out how Seurat was concerned with the advancement of painting in the 19th century.