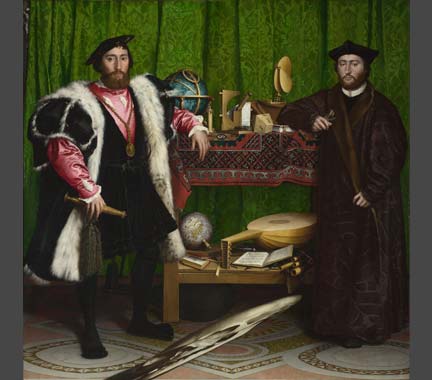 Ben Johnson: This painting has satisfied me for 40 years. It’s a painting full of mystery. I know that the history could be explained of the two people that are portrayed within the painting but that doesn’t interest me. It’s not the two people. For me they’re purely there to prop up the table that holds these mysterious objects – objects which were made to explain the physical world. They’re objects of science, of discovery, of mathematics, of logic. But when you put them all together, they become something much more. They’re a clear demonstration of the fact that we’re in this solid, physical world for a relatively short time. When we’re here we use our hands, our eyes and our curiosity to reshape the world... to make objects that help us to understand where we are. And we also use the materials that we find around us and we put them together because we are naturally makers of objects.

Also on the table, we have the objects that are used in music-making. We also have books of mathematics. And mathematics of course refers to quantity, volume, presence and relationship of elements. And what is music? It’s the relationship of time and space. It’s the silence as much as the note that creates the music; it’s the space between.

What else is going on? We have two people standing in a very firm and real space. Why does it feel so solid and real? Because they’re standing on a floor which is geometry and space. This is a floor which exists only a mile away from the National Gallery: this is the floor which we see in Westminster Abbey.

Perhaps the greatest mystery: this weird object that goes across the front of the painting. What is it? Take a journey! Go into the painting, walk to the side and look back across the surface. And what happens? This weird, distorted object all of a sudden becomes a skull, a playing with perspective; not just a gesture of a man that knows what he’s doing with perspective and is indulging himself in trickery. Maybe what he’s doing is wrapping up an important message about how close we are to death in daily life.

Ben Johnson takes us on a journey into Holbein's 'The Ambassadors', reflecting on its message about the true nature of our world.