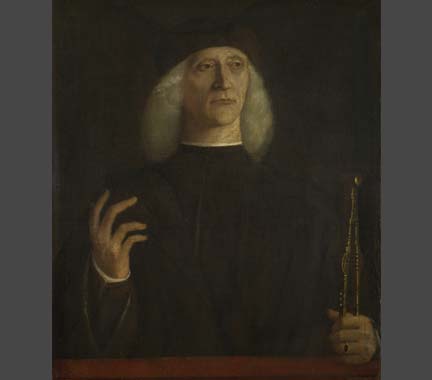 Ben Johnson: An Artist's Perspective
Attributed to Gentile Bellini, 'A Man with a Pair of Dividers (?)' – 2 mins 5 secs

Ben Johnson: What we’ve got in front of us is a painting of a young man, a young man with a pair of dividers. What I would like to believe is that this young man is Pacioli, the mathematician who was important to his society but also to his friends (like Leonardo). But also to his master whose studio he worked in when he was a 14-year-old boy in Sansepolcro.

He initially worked in the studio of Piero della Francesca. And undoubtedly he would have travelled with Piero della Francesca, over the mountains to the Ducal Palace of Urbino. And there he would have met Alberti the architect. He’d have probably heard discussions with engineers, mathematicians, scientists, artists and he would be given access to the world of books that were rare.

This was a time (1400–1500) when there was a huge amount of change in the world. Artist, scientist, engineer... they were often one and the same. But also the world of mathematics was becoming very important. And we know that when Pacioli left Sansepolcro he was already working on the notion of Platonic solids. He couldn’t explain his theories of Platonic solids; he was having problems until he was lucky enough to meet Leonardo and he described what a Platonic solid was. And Leonardo went away and came back with a set of drawings which allowed Pacioli to go to the next level of discussion, where he could explain to people what he was talking about. And one of things he was talking about was double-entry accounting.

Ben Johnson considers the identity of Bellini's sitter. Could it be a mathematician who knew Leonardo da Vinci? Explore the changing world in Renaissance Italy where science, art and engineering were closely interlinked.

Painting
A Man with a Pair of Dividers (?)
Probably by Gentile Bellini