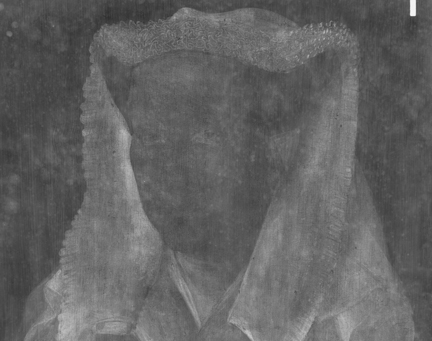 The precision of the underdrawing in Margaret’s face revealed by infrared reflectography and the perfectly calculated geometry of the final design might lead one to suppose that Van Eyck had worked out every detail of the portrait in advance.

However, examination of the X-radiograph, in conjunction with the infrared image, reveals that in fact he made several adjustments in the course of painting. 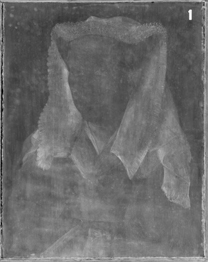 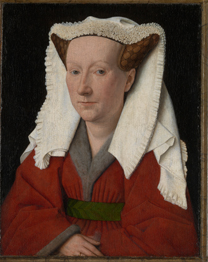 Since X-rays are transmitted through the whole object, not just the paint surface, an image of the wood of the panel and the marbling on the reverse is also recorded.

The X-ray opacity of the dense vermilion spatters means that they appear as grey splotches across the radiograph, in places reducing its legibility. 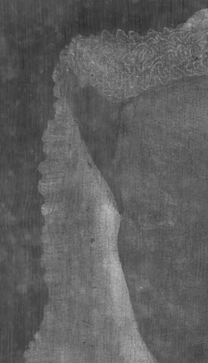 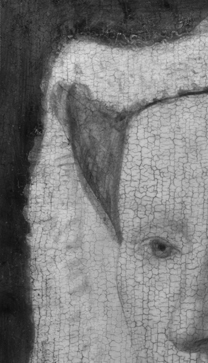 Changes to the headdress

The X-ray image confirms that Van Eyck had begun to apply the white paint of Margaret’s headdress before he decided that the horns of her hair needed to be made longer than in the underdrawing.

The exceptional X-ray opacity of the lead white paint of the headdress around her right cheek may simply be the result of careful painting up to this important contour. Alternatively, there may be an extra thickness of paint here because Van Eyck began to paint the headdress following the first sketched position of the crinkled edge of the fabric and then cancelled it. 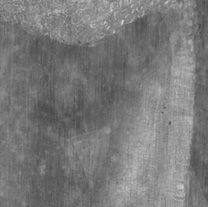 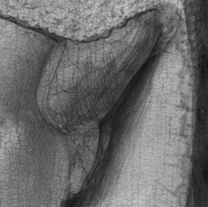 The quickly brushed strokes of white paint in the area of Margaret’s ear appear to confirm that originally it was to be covered, as also indicated in the underdrawing. It is difficult to imagine how this might have worked if the horns of hair were to remain exposed. 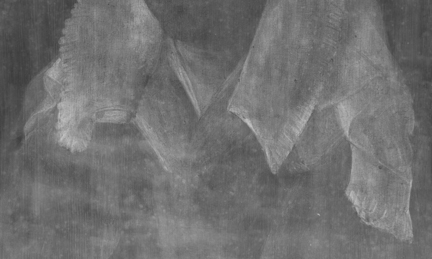 Several alterations were made to the arrangement of the folds and edges of the headdress, and on the left side of the portrait the white paint extended further to the left. 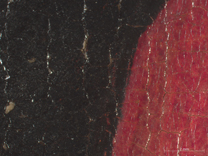 'Margaret, the Artist's Wife', photomicrograph taken before restoration showing adjustments to the edge of the red dress. A photomicrograph is a photo taken at high magnification through a microscope

Changes to the dress

The red paint of Margaret's sleeve also extended further left. Since the red pigments are almost transparent to X-rays, and in this area there is notable interference from the decorated reverse, this change can only be seen by close examination of the painting surface. In particular, it can be seen along the edges of the cracks in the black paint of the background.

On the right side, a hidden triangular corner of fabric appears between the present hanging folds. Its elimination was important for the jagged pattern formed by the creamy white shapes as they intersect with the deep red of the dress.

Equally important for the design is the painting out of the fine white linen at Margaret’s neckline. On the evidence of other similarly costumed women in Netherlandish paintings of this period, it seems to have been the custom to show the linen worn between the skin and the fur lining of a dress. However, if left visible this extra area of white might have spoilt the effect of the headdress. 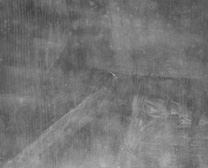 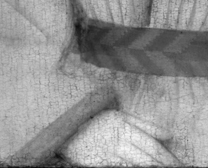 Perhaps the most significant alteration of all is the introduction of Margaret’s hands, crossed and lightly resting against the folds of her skirt. The long heavy sleeves make them appear undersized, as does their cutting by the frame edge.

How Van Eyck originally envisaged the pose of Margaret’s arms is not clear. Both infrared and X-ray images suggest a triangular gap between sleeve and waistband. If this is the case, the arms would have been held further apart and the hands perhaps dropped out of the picture.

The decision to include Margaret's hands was made at the underpainting stage. They appear to have been outlined in black over the first layers of red paint and then painted with the same flesh tints as for her face. The increase in transparency of the upper paint layers with age means that the red underlayers are now visible, especially in the thinly painted further hand and its fur cuff. 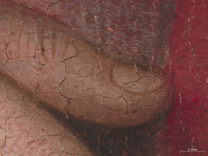 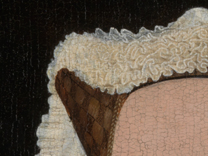 'Margaret, the Artist's Wife', detail. The frill has probably been extended over the black background to suggest the fineness of the fabric

The extension of the frilled edge of the headdress over the black background at the upper edge might be thought to be a pentimento. However, it is probably not one. It is just as likely to be a deliberate effect to demonstrate the gauzy fineness of the linen fabric.