There is no record of the portrait having been cleaned previously, which led to the claim that it had not been touched by restorers since the 17th century.1 The appearance of the painting and its varnish layers, however, indicated that it is likely to have last been cleaned in the 19th century. 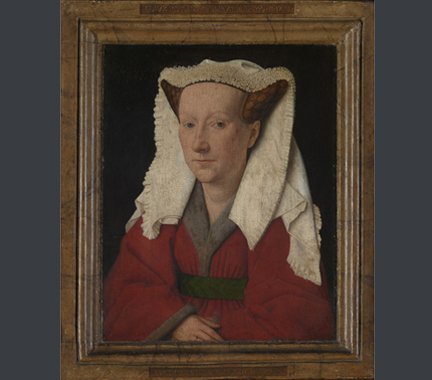 'Margaret, the Artist's Wife', before cleaning

The natural resin varnish, either dammar or mastic, had inevitably become discoloured and slightly opaque with age. This discoloration emphasised the unevenness of its application.

For example, part of the veil on the right of the painting appeared much brighter as a result of the thinner, less discoloured varnish in this area. A greyish layer of pigment applied over the white veil by the previous restorer, presumably to tone down the original creamy white colour, contributed further to the patchy appearance. 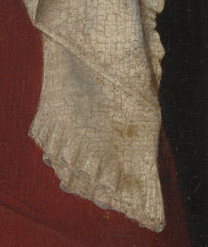 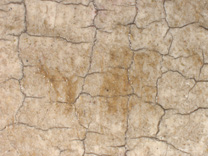 'Margaret, the Artist's Wife', photomicrograph before cleaning. These details show the uneven discoloration of the varnish and the patchy grey toning layer applied in a previous restoration. A photomicrograph is a photograph taken at high magnification through a microscope

The old restoration of the paint losses, which are very small, often no more than a chipped corner to a raised crack, was unnecessarily extensive and had darkened. The reddish brown blotches on Margaret’s cheek bone, for instance, could easily be mistaken for skin blemishes. Other very evident retouchings included the brown smears on the grey fur, covering small losses and open cracks in the original paint. 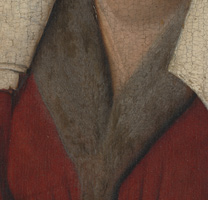 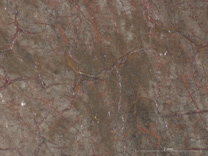 Furthermore, with time the surface of the painting had accumulated various accretions, mainly small but disfiguring to a work of such refinement. For example, there were several dark marks on Margaret’s left eyelid. 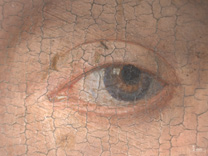 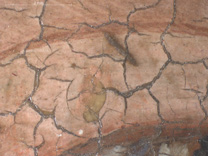 'Margaret, the Artist's Wife', photomicrograph before cleaning, at higher magnification

With the help of magnification we can see that only one of these marks, in the centre of the eyelid, is a retouched paint loss. Above it is a lump of a dark brown substance (clearly sitting on the surface and crossing the old cracks in the paint). Towards the corner of the eye, darkened varnish has filled a small depression in the surface. 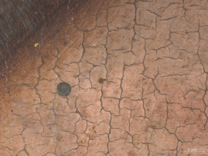 Scattered across the paint surface were numerous spots of dark green paint, presumably splashed onto the portrait during redecoration of a room, and also occasional flecks of gold leaf.

Although minor, these defects combined to give the painting a shabby appearance and made the sitter seem older and more tired than her 33 years might lead one to expect.

Next: The cleaning of the painting