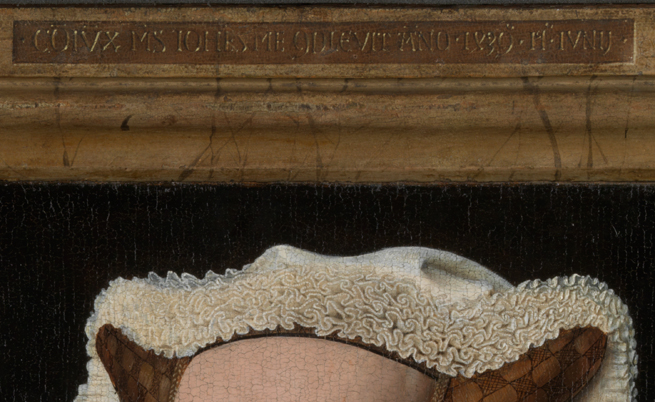 Jan van Eyck both signed and dated the portrait and identified the sitter with the inscriptions on bands along the upper and lower edges of the frame. The Latin  inscription on the upper moulding reads: ‘CO(N)IU(N)X M(EU)S IOH(ANN)ES ME (COM)PLEVIT A(N)NO . 1439˚ . 15˚ . IUNII.’ (My husband Jan completed me on 15 June 1439.)1

'Margaret, the Artist's Wife', detail of the lower frame moulding

The Latin inscription continues on the lower moulding with: ‘[A]ETAS MEA TRIGINTA TRIU[M] AN[N]ORUM. AL ICH CAN.’ (My age being 33 years. As I can.)

The same pun on the word 'Ich' and Van Eyck’s name appears on the possible self-portrait in the National Gallery, Portrait of a Man (Self Portrait?), 1433. 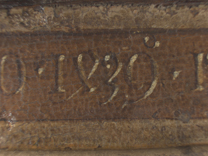 'Margaret, the Artist's Wife', photomicrograph of the inscription on the upper moulding. A photomicrograph is a photograph taken at high magnification through a microscope 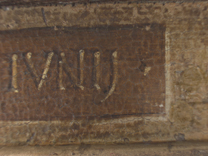 'Margaret, the Artist's Wife', photomicrograph of the inscription on the upper moulding

The way the light catches the right ends of the inscription panels indicates that we are to understand them as set into the marbled frame mouldings. The illumination of the letters and numerals also implies that they are indented and perhaps gilt.

It is not clear what the brown background to the letters is meant to represent. Apart from the glint on the letters there is no suggestion of the reflective surface of a metal. The facetted rhomboid dots at either end of the strips look more like punctuation points (and are lit as such) rather than pins securing metal plates. Perhaps the inscriptions are to be thought of as strips of tooled leather glued into a shallow recess in the marble.

The mouldings of the frame on the front face of the portrait were painted a warm yellow-grey and streaked with a translucent brownish black to represent the veins of the marble.

In the recent treatment the frame was cleaned lightly, removing mainly surface dirt and smears of beeswax that had been applied to consolidate it. It retains various surface coatings (in part possibly original) and also the inevitable build of encrusted dirt and minor damage from handling to which frames are vulnerable. 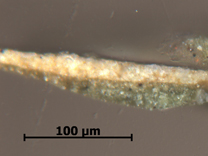 'Margaret, the Artist's Wife', paint cross-section from the upper right corner of the frame mouldings on the front. The ground is missing from the sample 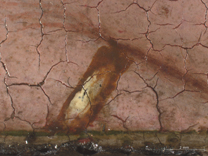 'Margaret, the Artist's Wife', photomicrograph of the lower edge

Examination of the edges of open cracks at the joins, and also a paint sample, suggest that originally Van Eyck may have planned a more colourful marbled effect since the lowest layer is a bright green colour containing verdigris mixed with a lead-tin yellow and a little black and white. Over it lies the warm yellow-grey of the present decorative scheme. The medium of both layers is the same heat-bodied linseed oil used for the portrait itself.

Another possibility is that the green underlayer was applied to impart a cooler tonality to the superimposed layers. It could also have been applied simply to use up surplus green paint from the painting of Margaret’s sash. Although the sash has not been sampled because of its perfect condition, it was almost certainly painted with the same pigments.

To neaten the junction between frame and painting at the lower edge, and perhaps also to suggest the light catching the rim, Van Eyck brought the frame paint slightly over onto the painted surface, finishing it with a fine line of dark green.

'Margaret, the Artist's Wife', detail of the upper frame moulding on the reverse

The paint on the frame mouldings on the reverse is not original. In some areas where the later layers have flaked away, glimpses of the original decoration of black, possibly veined or spotted with red, are visible. This seems to have become damaged at a relatively early date and so the mouldings were covered with a new layer of white ground, much thicker than the original one, and several layers of paint applied. 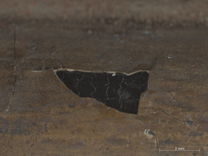 'Margaret, the Artist's Wife', photomicrograph of the upper frame moulding on the reverse where the redecoration has flaked from the original black paint 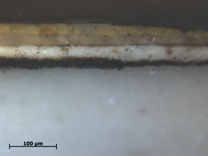 'Margaret, the Artist's Wife', paint cross-section of the non-original decoration of the mouldings with the new ground and four layers of repaint

The lowest layer of paint is black in imitation of the original. Over this is a sequence of cream and yellow-brown layers. The tendency for the new ground to blister and flake away from the remains of the original paint and ground means that there are extensive opaque brown retouchings.

Even these retouchings are very hard and insoluble in normal cleaning solvents, an indication of the age of the repainting of the frame. The removal of the brown layers would be laborious and very difficult. Given the likelihood that little original decoration has survived, it was decided that this repaint should be left in place.

Next: The marbled reverse