Leaving Northern France where he was working alongside Pisarro, Cézanne returned to his native South in spring 1876, staying at L’Estaque, a fishing village near Marseille. He worked out-of-doors, focussing on the violent Mediterranean light and its ability to both enhance colours and flatten volumes. “It’s like a playing card”, he wrote, “Red roofs against the blue sea”. Cézanne sent this picture to the third Impressionist exhibition in 1877.

(Showing 6 of 12 works)
View all
An Old Woman with a Rosary
Paul Cézanne
A old women, her gaze unfocused, clutches a rosary – a string of beads used in prayer – tightly in her hands. According to the writer Joachim Gasquet, the sitter was a former nun who had escaped from a convent, wandering aimlessly until Cézanne took her on as a servant.Gasquet found this painting...
Not on display
Avenue at Chantilly
Paul Cézanne
Cézanne spent several months over the summer of 1888 working in and around Chantilly, some 24 miles north of Paris. This is one of three similar oil paintings of the park surrounding the chateau that he produced during his stay. The symmetry and spatial depth of this view may have appealed to him...
Gallery B
Bathers (Les Grandes Baigneuses)
Paul Cézanne
Around 200 of Cézanne’s works depict male and female nude bathers, either singly or in groups, in a landscape. This large painting is one of three pictures of female bathers that Cézanne worked on during the final decade of his life. They represent the culmination of his lifelong investigation of...
Gallery B 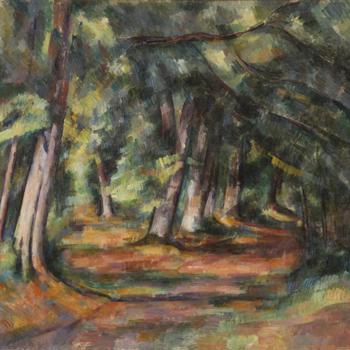 Forest Path (Fontainebleau?)
Paul Cézanne
Gallery B
Hillside in Provence
Paul Cézanne
The wall of angular, jutting rock formations in this painting may represent a quarry, with the cuttings revealing geological strata. While the hillside is somewhere in Cézanne’s native Provence, the specific location has not been conclusively identified.Stylistically, the painting relates to scen...
Not on display
Landscape with Poplars
Paul Cézanne
This painting is of a summer landscape in Cézanne’s native Provence in the south of France. Like the Impressionists, Cézanne was interested in depicting the landscape primarily using touches of colour. Although this painting shows Cézanne’s debt to Impressionism, his method is more controlled. Fo...
Gallery B
Self Portrait
Paul Cézanne
Paul Cézanne was about 40 years old when he painted this self portrait in Paris around 1880–1. He was now middle-aged with a family to support, and the intensity of his earlier self portraits has here given way to a more distant and reflective presence. Although relatively small, the portrait has...
Gallery B
Still Life with Water Jug
Paul Cézanne
Gallery B
The Avenue at the Jas de Bouffan
Paul Cézanne
Gallery B
The Grounds of the Château Noir
Paul Cézanne
The Château Noir was a rambling house situated in extensive grounds near Aix-en-Provence in the south of France. Surrounded by wild vegetation, the run-down, isolated chateau offered Cézanne many subjects, and it became one of his favourite locations. He rented a small room in the house from 1897...
Not on display
The Painter's Father, Louis-Auguste Cézanne
Paul Cézanne
An older man sits, legs crossed and head bowed, absorbed in his reading. This is Cézanne’s father, Louis-Auguste. He was probably in his early sixties when his son painted this portrait directly onto an alcove wall in the salon of Jas de Bouffan, the country residence outside Aix-en-Provence that...
Gallery B
The Stove in the Studio
Paul Cézanne
During the 1860s Cézanne divided his time between his family home in Aix-en-Provence and Paris, where this picture was probably painted. It evokes the privation of his Bohemian existence in the capital. Cézanne has rearranged the objects in his studio, and we see them from a high viewpoint, as th...
Gallery B
You've viewed 6 of 12 paintings