The National Gallery Masterpiece Tour: Canaletto's 'A Regatta on the Grand Canal'

The National Gallery owns a second version of this subject by Canaletto dating from about 1735 (fig. 9). In this painting, the viewpoint is slightly lower and the figures in the foreground are larger. 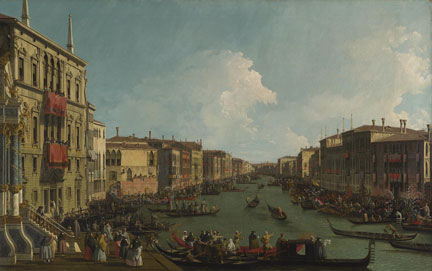 In the 1740 picture, Canaletto shifts the viewpoint upward and minimises the size of the figures, thereby suggesting a broader, more imposing view. This change might be explained by the fact that he conceived the painting with its pendant in mind, Venice: The Basin of San Marco on Ascension Day (fig. 10), which boasts an expansive view of the water in front of the Doge’s Palace, an area through which the regatta also passed. This painting represents the annual ceremony in which the Doge dropped a gold ring from the barge, symbolising Venice’s marriage to the sea. 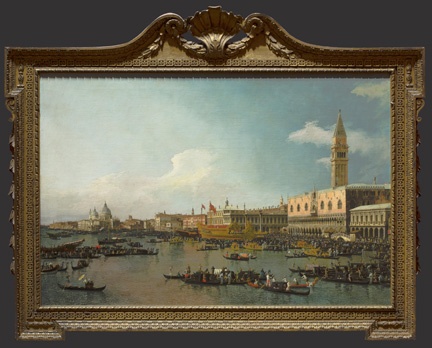 In the distance is the church of Santa Maria della Salute with its imposing rounded domes. To its left is the entrance to the Grand Canal, which is further elaborated in the ‘Regatta’ painting. Together, these two grand views of Venice allowed viewers to connect adjacent portions of the city and to witness Venice’s impressive public ceremonies. Their striking carved and gilded frames are datable to the mid-18th-century and are probably original.

Paintings such as ‘Regatta on the Grand Canal’ made Canaletto the most celebrated view painter of 18th-century Venice. The artist’s remarkable ability to capture Venice’s unique beauty was instrumental in the development of the ‘veduta’, or view painting, as an important, independent genre. Canaletto’s paintings were extremely popular with British visitors on the Grand Tour who appreciated his apparent topographical accuracy and precision, and were avid collectors of his works. Between 1746 and 1756, Canaletto settled in London and his work was highly influential on view painters in England such as Samuel Scott (about 1702–1772) and William Marlow (1740–1813).