In 2010, following 18 months of conservation, Leonardo's Virgin of the Rocks returned to the Gallery walls not only newly cleaned but also in a new frame. 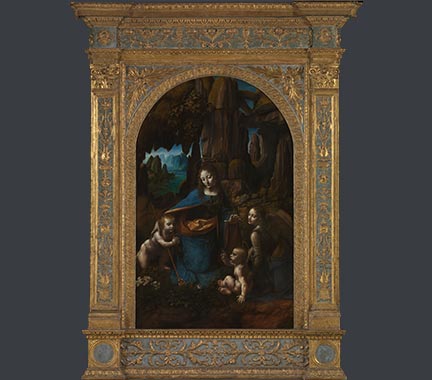 Before, the painting was in a 19th-century frame. Though built in a style that was sympathetic to Renaissance design, the old frame was not truly contemporary. It would probably still be just as it was, if not for a chance discovery by Peter Schade, Head of Framing at the National Gallery: 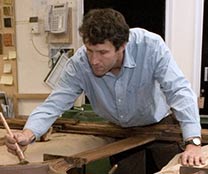 Peter Schade is always on the lookout for suitable frames for National Gallery paintings. With the painting already in the conservation studio, Schade made his find. In an auction catalogue, he discovered fragments from an early 16th-century north Italian frame – one that was entirely suitable for the Leonardo.

Renaissance frames of the style used in 16th-century Milan, do not come on to the market very often. This was a significant find which could be purchased for the Gallery at just the right time.

The fragments of frame consisted of the cornice at the top and the pilasters on the sides. This gave Schade a strong base to build on, creating a frame that could convey the original setting. The fragments could be draped around the painting, and fitted accurately to the work. The missing sections could then be added gradually.

First hung in the chapel of the Confraternity of the Immaculate Conception in Milan, the ‘Virgin of the Rocks’ was originally set into a larger altarpiece, designed by the master woodcarver Giacomo del Maino.

By referring to other works by Giacomo, Peter Schade was able to carve the missing elements so that they captured the sense of contemporary designs from the time of Leonardo. He paid close attention to a frame by Giacomo from a church in Ponte in Valtellina, North of Milan. From this frame, he drew the design for the friezes at the bottom and inside edge of the frame, as well as the leaves in the space between the arches. 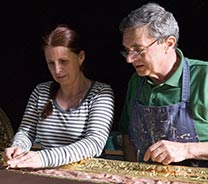 With the carving complete, Schade could then pass his work to visiting conservator Adriano Lorenzelli and the Gallery’s own Isabella Kocum who took on the painstaking work of gilding and toning the frame.

The result is a frame which gives a much greater sense of the original setting. As Schade explained:

“Because the frame is composed of original elements, and the new additions are closely modelled on contemporary examples, we can display the painting in a way that evokes the flavour of the original setting.”

"Peter’s new frame – if ‘new’ is quite the right word – is another important factor in helping us understand something of Leonardo’s aims and ambitions for the ‘Virgin of the Rocks’. Surrounded by bright gold and blue ornament, the deliberate absence of strong colour in Leonardo’s picture becomes even more striking and its relief is even more effective."

The Virgin of the Rocks
from Panels from the S. Francesco Altarpiece, Milan
Leonardo da Vinci
about 1491/2-9 and 1506-8
Tag: Painting
Read more