How did Monet use buildings to convey the speed and dynamism of 19th-century modern life?

Explore the artist’s exhilarating, if short-lived, fascination with Paris.

In Monet’s pictures of Paris, the buildings he chooses to represent often express time, that is, they are telling you that you are absolutely in the now.

In 1867 the French state organised a universal exhibition in Paris which drew millions of people to the city. And that seems to have sparked in Monet an interest in painting the modern city, no doubt hoping to sell them.

When Monet arrived in Paris the city was in transformation. The Baron Haussmann was tearing down the old city and cutting vast new boulevards right through its heart. They all look remarkably alike, these great, long straight avenues lined with stone apartment buildings, but they were the symbol – if you will – of modern Paris; the most modern city in the world.

When we look at Monet’s paintings of the modern urban environment, it’s very useful to look at them in pictorial terms. When Monet painted the Quai du Louvre in 1867, he painted both the view into the distance, but also the traffic and pedestrians on the Quai, going across the picture space. In 1873 painting the Boulevard des Capucines, again from a high vantage point, he looked down on the busy Boulevard at an angle, so one gets a sense of the movement and the thrust of the busyness on the street. In 1878, painting the Rue Montorgueil with the flags fluttering on the facades each side of the street, he painted from a viewpoint several stories up looking down into the crowded street and there’s a strong perspective up the Rue Montorgueil, filled with the people and the flags, but that pictorial structure and that perspectival drive gives a sense of the momentum of the modern city.

The Gare Saint-Lazare was particularly interesting to Monet because it was the train station he used. He lived out to the west of Paris at Argenteuil. When he came in to the city, and when he left, he passed through the Gare Saint-Lazare. It was a particularly modern structure with its great steel roof, and just beyond it the huge steel Pont de l’Europe, one of the great bridges of Paris. And so everything there bespoke modernity, absolute contemporaneity, and what Paris was becoming.

Monet’s interest in the modern city and Paris as a dynamic contemporary environment really lasted little more than a decade from the late 1860s to the late 1870s. Thereafter he painted in London around 1900/1901, but those pictures are very much concerned with atmosphere, fogs and pollution, and never again was he to go back and work in Paris.

What did Monet particularly love about London, and why in 1899 did he decide to set up a temporary studio from his hotel room at the Savoy?

Monet was in London over the winter of 1870 to 71, as he was avoiding the Franco-Prussian War in France at the time, and he greatly enjoyed painting in the city. Over the years afterwards he intended to come back, but he didn’t finally do so until he came back in 1899. Then he returned in 1900 and 1901. On all three occasions painting from the Savoy hotel.

Well, we’re here at the Savoy on the fifth floor, on the riverside, and these rooms are important because they’re the exact rooms that Monet painted from. Part of the allure for Monet was the balconies, which ran all along the riverfront of the hotel. Unfortunately they’re gone now but at the time they were a fantastic feature and they meant that you could literally sit outside and paint al fresco, and the views were amazing.

The Savoy suited him very well because it’s on a bend on the river, and Monet got into a pattern of painting different motifs at different times of day. In the morning he would paint facing eastwards across Waterloo Bridge. In the late morning and afternoon he would paint facing southwards down towards Charing Cross Bridge and the Houses of Parliament. And in the late afternoon he would go to St Thomas' Hospital where he had permission to paint facing across the Thames towards the Houses of Parliament, which he would paint with the evening light coming down behind the buildings.

So as far as we know, Monet first came to St Thomas’ Hospital, which is opposite the Houses of Parliament, to paint the sun setting on 13 February 1900. And one of the first paintings he did was the one which has all that glorious colour in the exhibition, which obviously inspired him to come back and do up to 19 paintings that have survived today.

And within those 19, nine of them actually have the sun painted in the actual image, so that we can then use solar geometry to work out the dates that Monet actually painted those particular images. Solar geometry is a very simple method of actually determining the exact position of the sun in the sky. We have what’s called the azimuth, which is a sort of compass direction, and we have the altitude – the height of the sun in the sky – and with those two numbers we can work out, for any place in the world, where the sun would be on any time. So it’s like a clock, a very exact clock, which we can use to date Monet’s pictures pretty exactly within plus or minus a day, and the time within plus or minus a few minutes. So that very first painting on the 13 February 1900, we can actually date it, but also we can  time it to a quarter to four when he actually first started to paint it.

Each canvas he might work on only for a few minutes when a particular light effect was there, and then, as soon as that light effect would change, he would put that canvas down and a new light effect came, and he would either start a new canvas or pick up a canvas that had that light effect, and he would paint on that for a bit. Sometimes he was painting on ten or more canvases during the course of a day, but the work on each individual canvas would only be for a few minutes. The point of this is that the pictures were cumulative; they were built up over days and months, and then often reworked in his studio in Giverny. So some of these pictures were actually worked on over several years, and the paradox of that is that what he was after was the effect, the effet, of something that had only lasted a few minutes.

What began as a tourist holiday to Venice in 1908 ended up sparking some of Monet’s most haunting and mysterious paintings of architecture.

Travel along the canals of Venice with Rosalind McKever to revisit the views that Monet painted.

In 1908 the Monets had not travelled outside France for several years, but that autumn they received an invitation to come here, to Venice. That invitation came from Mrs Mary Hunter, an exuberant patron of the arts and society hostess who Monet had met in London through John Singer Sargent. Mary Hunter had rented this Gothic palazzo on the Grand Canal, Palazzo Barbaro. It was owned by Ariana and Daniel Curtis, and it was already at the heart of the American artistic community here. It had been immortalised in Sargent’s portrait of the Curtis’s and in Henry James’s novel ‘The Wings of the Dove’.

Typically Monet wasn’t affected by this social milieu, or by the whole history of artists who had painted the city before him. But strangely, for an artist who had been painting across water his whole life, here in Venice he didn’t start to paint for a week. He told his wife it was too beautiful to be painted. However, it seems that the city’s autumnal light, which Monet called a ‘unique light’, drew him in.

Monet infuses this quality, this autumnal quality, into his paintings by excluding people from them entirely. The Palazzo Contarini he shrouds in mysterious shadow, Santa Maria della Salute seems to glow in the afternoon light, and the Grand Canal is completely empty of traffic.

It’s worth remembering in the 15 years before Monet arrived here, the number of visitors to the city soared from around 160,000 to three and a half million a year. This was thanks in part to the railways and to the Simplon Tunnel that allowed you to speed through the Alps like never before. And Venice was filling with hotels to accommodate these new tourists.

So after a couple of weeks with Mrs Hunter, the Monets came here, to what was then called the Grand Hotel Britannia, and according to Alice Monet the view was even more beautiful than that of Palazzo Barbaro. And you can certainly see, over there in the distance, San Giorgio Maggiore and round here, Santa Maria della Salute. On this very balcony Monet painted scenes of San Giorgio Maggiore, the church glowing in the evening light, but he included a couple of swiftly painted gondolas to stand in for the city’s residents and tourists. The feeling of memory which seems to haunt these paintings is particular to how Monet conceived them. He was only in Venice for a short period; he planned to come back the following year, and he wrote to his dealer, Durand-Ruel, that he was doing some paintings on the off-chance, just to hold on to the memory.

Sadly, Monet never made it back to Venice. He only picked up these canvases again in 1911 after the death of his wife, Alice, exhibiting them the following year so everyone could see this wonderful visual memorial of their happy time here together. After this, Monet dedicated himself to painting his garden at Giverny, making the Venetian pictures his last paintings of architecture. 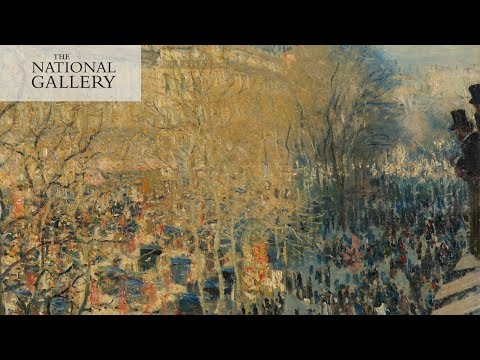 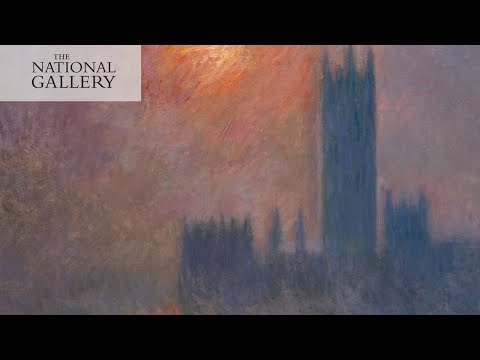 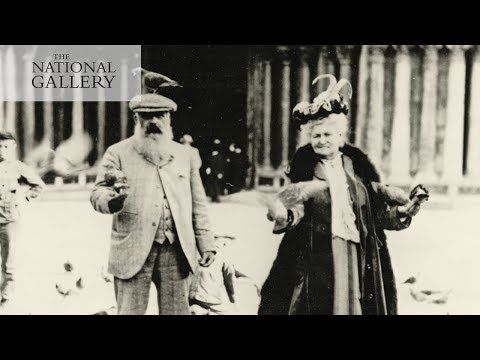