After meeting in 1511 in Rome – a city plagued by poverty and crime yet also the wealthy and powerful centre of the Catholic Church – Michelangelo and Sebastiano del Piombo join forces in a bid to marginalise their artistic rival Raphael from lucrative commissions.

Rome, at the beginning of the 16th century, was not the world city that we know it as today. It was a medieval city. It had not undergone the modern renovations seen in other parts of Italy, such as Florence or Venice. It was plagued by poverty and crime, and was a pretty dangerous place at this time. It was, of course, the centre of the Church, and therefore, a centre of power and considerable wealth. Pope Julius II, elected in 1503, was hugely ambitious, both politically and in terms of renovating the Vatican and the city. A lot of building structures were ruinous, so money poured into Rome. There was a lot of need for new building, new decorations, plenty of work for artists, and the best artists in Italy were pouring into Rome, hoping to get jobs. Amongst the many artists that worked for Julius, the most significant are Donato Bramante, the architect, Raphael, and Michelangelo. Michelangelo was supremely good at one thing, nobody could touch him at the subject of the male nude. Raphael, on the other hand, could do a lot of things. He could do landscapes, he could do pretty girls, he could do portraits, he could do very many things that Michelangelo chose not to do. So Raphael was painting the Stanza della Segnatura while Michelangelo was working on the Sistine ceiling. And this, I think, sparked the rivalry between them. It certainly made Michelangelo feel paranoid about Raphael's increasing fame and influence in Rome. Into this increasingly volatile situation comes Sebastiano, who arrived from Venice in 1511. Sebastiano was a highly sophisticated oil-painter, and he had brought with him to Rome the latest developments in oil-painting technique from Venice, never seen before in Rome. At the same time, he must have met Michelangelo who saw the potential for collaborating with Sebastiano in order to marginalise Raphael.

The first collaboration between Michelangelo and Sebastiano was for an altarpiece depicting the Virgin mourning the dead Christ, or 'Pietà', as it’s called. Michelangelo provided Sebastiano with figure studies. The figure of the Virgin is, as is often the case with Michelangelo, based on a live model, a male model. And we are fortunate enough to have a wonderful drawing studying the torso and the clasped hands. What Sebastiano did with Michelangelo’s design was to imbue, especially the body of Christ, with an incredible sensuality. There's a tactile quality to the surface of his dead skin, that you wouldn't imagine Michelangelo achieving in the same way. So, despite the fact that everybody knew that this was a collaboration between Michelangelo and Sebastiano, what was emphasised, once it was finished, was the night landscape; Sebastiano’s main contribution.This was something new in Rome, and incredibly impressive. It is almost Impressionistic in the freedom of the brushwork. And it is so atmospheric. Here, in San Pietro, Montorio, another of the great collaborations between Sebastiano and Michelangelo was the Borgherini Chapel. The decoration of the chapel in the half dome we see the 'Transfiguration’ of Christ. And going down, we have the main image that is the 'Flagellation of Christ'. The part that Michelangelo designed is the 'Flagellation of Christ'. And it was unprecedented at that time to have a flagellation as the main altarpiece. And indeed to have a flagellation at this scale. It became their most famous composition, their most copied composition, and indeed it became the model for many flagellations, at least in Italy. The novelty is not only about the new iconography, but also about the technique. Here, Sebastiano, for the first time, is able to solve a big problem. A problem that also Leonardo da Vinci faced in 'The Last Supper', in Milan. Leonardo was trying to obtain deep colours and more contrast between light and darkness. All this was attainable not by fresco, but by oil colouring. But we know very well that Leonardo’s 'Last Supper' was very much damaged. So, Sebastiano, here, was able to go further and obtain a durable technique with oil painting. And Giorgio Vasari and the documents of the time recorded this great achievement.

The Raising of Lazarus

National Gallery experts, Matthias Wivel and Jill Dunkerton, reveal new insights into Michelangelo and Sebastiano del Piombo’s The Raising of Lazarus, a great altarpiece painted for the Cathedral of Narbonne in France, and one of the foundational works in the National Gallery Collection.

Cardinal Giulio de' Medici was the cousin of the Pope Leo X and he had been awarded a very important bishopric in Narbonne, southern France. He decided to commission two great altarpieces for the cathedral there. From Raphael, he commissioned' The Transfiguration of Christ' From Sebastiano, 'The Raising of Lazarus'. It’s long been known that Michelangelo played a part in the design of 'The Raising of Lazarus'. Vasari actually mentions it, and we actually still have some of the drawings that he made for it in, for example, those in the British Museum. It has naturally been thought that he made the drawings in the first stage of designing the altarpiece,that is when Sebastiano got the commission, probably in late 1516. But actually, as a result of our investigation of the painting, using the technique of infrared reflectography, we’ve discovered that this was not the case. There is a study which Sebastiano made for the drapery of this figure down here. But interestingly, if you turn that drawing through 90 degrees there is then a sketch showing the torso of a man in a frontal position. And we think that that may be Sebastiano’s first preliminary idea for a Lazarus, and that would link to what we found in the infrared. This is significant because it shows that Sebastiano both drew and actually painted a figure of Lazarus himself, without using Michelangelo’s drawings. What I like to think is that Michelangelo came to see Sebastiano in his workshop and he saw the picture and he said “Bastiano...” because that's what they all called him, “Yes, this is great, but...that figure of Lazarus is a bit static. This needs energising. It needs to have more dynamism in the composition." And that is when Michelangelo starts to make the drawings. What's really interesting about Sebastiano's interpretation of 'The Raising of Lazarus' is that he depicts a variety of reactions to the miracle. Starting with Lazarus himself, who is depicted in almost palpable, physical shock; he’s drawn his first breath after having died. Surrounding Christ and Lazarus are the Apostles and various bystanders. And each individual has his or her own reaction to it. Some are in awe of the miracle and fall to their knees in front of Christ. Others are shocked. Still others are disgusted by the carrion smell emerging from the tomb. Yet others actively debate the miracle. This is interesting because it invites the viewer to form his or her own opinion about what’s happening, to actively debate it and contemplate it. Rather than telling the viewer what to think, it encourages the viewer to think.

Letters written between 1516 and 1534 by Michelangelo and Sebastiano del Piombo reveal much about the artists' friendship, which eventually came to an acrimonious end while Michelangelo was painting 'The Last Judgement' for the Sistine Chapel in Rome.

July 1518, Roma: 'Dearest friend, dearer to me than a father. Greetings.' The correspondence between Sebastiano and Michelangelo charts a friendship which lasted for the best part of a quarter of a century, which was a slightly uneven relationship in that Sebastiano explicitly says he hero-worships Michelangelo. The letters are our main source of information about their work, about their personal relationship, and about a host of other issues occupying each artist. February 1531, Roma: 'Regarding your visit, for my part, I would very much like it so I could enjoy a little of your company because I’m really dying to see you.' It is important to realise that the relationship between Michelangelo and Sebastiano was mainly a long-distance one. Between 1516, when Michelangelo relocated to Florence, and 1534 when he resumed residence in Rome, they only saw each other a few times. The rest of their interaction is via letters. May 1525, Fiorenza: 'My dearest Sebastiano. Yesterday evening, our friend Captain Cuio and several other gentlemen kindly invited me to have supper with them which gave me the greatest pleasure. I was infinitely delighted when, on the subject of art, I heard the said Captain say that you were altogether unique and were held to be so in Rome.' We’re very fortunate to have one letter from Michelangelo to Sebastiano in which he speaks to him in quite intimate terms, and expresses genuine affection for him and for his work. 'Don't say, henceforth, that you are not unique when I write and tell you that you are, because there are too many witnesses.' Eventually the friendship between Michelangelo and Sebastiano came to an end. It came to an end not long after Michelangelo, after many years, returned to Rome in 1534, to live there permanently. The ostensible cause of the rupture, according to Vasari, was a dispute about plaster. Sebastiano encouraged Michelangelo to paint 'The Last Judgement'; this huge painting on the altar wall of the Sistine Chapel, in oil and to use a special preparation which would be conducive to this medium. We don't know, but one possible explanation is that Michelangelo actually thought about and even perhaps tried his hand at painting 'The Last Judgement' in oil. On Sebastiano's advice; realised that it was unsuitable to his needs, confirming his dislike of the medium; decided to have the preparation and whatever he had painted taken down and have the wall re-prepared for fresco. And after that, they don't seem to have been on very good terms, ever again. It is clear that Sebastiano spent most of his career assimilating the lessons of Michelangelo. Through this gradual assimilation Sebastiano managed to create works of great force and originality. Works that transcend the moment, that are timeless and which speak to the core of our being. 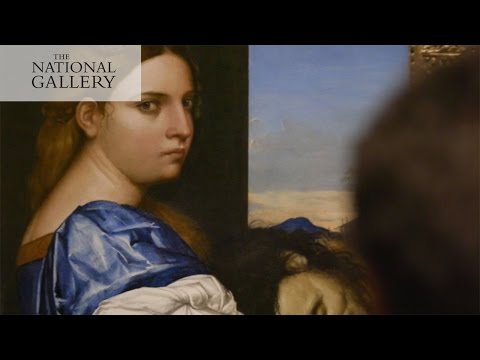 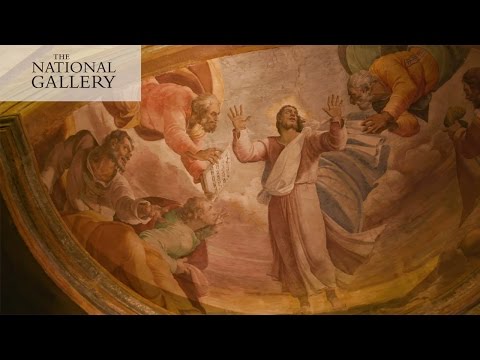 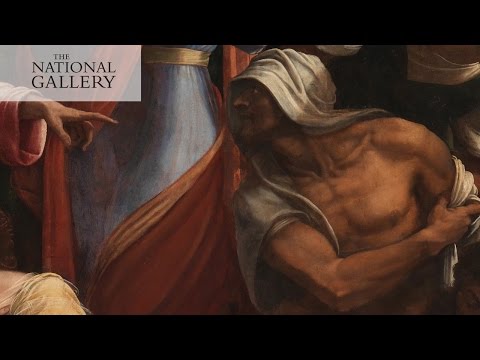 3.58
The Raising of Lazarus 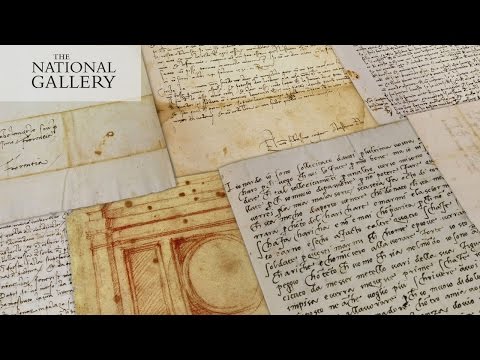