From Pablo Picasso to Cornelia Parker and from the Young British Artists to contemporary global art contexts, discover avant-garde art of the 20th century and beyond

But is it art? The statement has come to represent the puzzlement felt by many towards modern and contemporary art. This response is understandable given the dramatic changes that characterise the 20th century visual arts. We see an explosion of media, from traditional paint on canvas to conceptual art, installations, interventions, performance and video art.

Over six sessions we will look at some of the ideas about the new, the modern and the future that became influential during the 20th century and beyond, and demystify the concept of avant-garde art.

Particular areas of focus will include the road to Abstraction, new media, feminism, gender politics, issues of race, and non-European art. We will consider the influence of avant-garde art in Paris in the first part of the 20th century before its eclipse by New York after World War II, and the later importance of London and Berlin as centres of the international art market.

The changing art market, from the expansion of commercial galleries at the end of the 19th century through to the economics of the contemporary art market will be discussed. Finally, Tate Modern’s impact on art today, through its determination to redress the balance of traditional narratives of the story of art will be analysed.

Week 1: The shock of the new

This session introduces key artists and themes, before focussing on Paris as the centre of the art world c.1900. We will look at the 'isms' of the early 20th century, including Cubism, Futurism and Suprematism, explore themes of art and politics, and focus on some of the iconic images of this period produced by Picasso, Kazimir Malevich, and Matisse, as well as Natalia Goncharova, Lyubov Popova and Olga Rozanova.

Week 2: The road to Abstraction

Malevich’s 'Black Square' of 1915 marks the moment where colour and form replaced  a recognisable image. Not all vanguard artists embraced abstraction, but from 1915, this was the choice for many. We will look at the path to abstraction followed by Hilma af Klint and Georgiana Houghton as forerunners of what Kandinsky and Mondrian made mainstream.

Week 3: From Dada to Surrealism

In this session we will look at the dual impact of Sigmund Freud and of World War I on many European artists.

Learn how war and politics created the background to the emergence in 1916 of Dada and discover the influence of this movement. We'll trace its morphosis in 1920s Paris into Surrealism and the art of Salvador Dali and Dora Maar, and look at Marcel Duchamp, godfather of Conceptual Art, whose practice ripples through the decades and finds echoes in the work of contemporary artist Martin Creed.

Image: Detail from Visitors in the exhibition 'Young Bomberg and the Old Masters' at the National Gallery (2019)

Week 4: From Abstract Expressionism to Pop 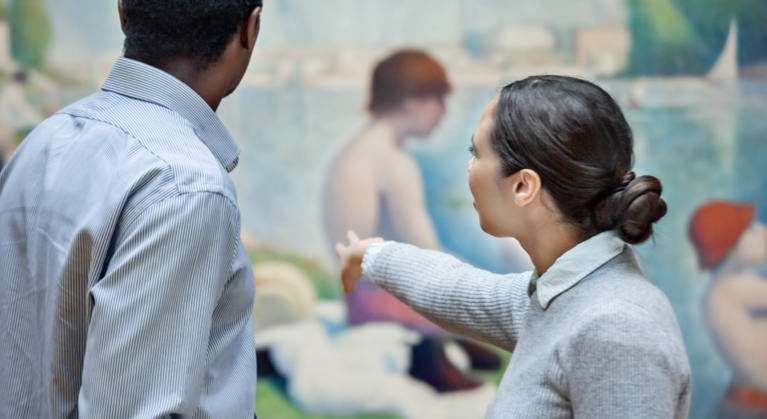 This week we look at the impact of the Young British Artists, such as Cornelia Parker, Jenny Saville and Sam Taylor Wood, who rose to prominence in the 1990s, and on the powerful effect of Damien Hirst on the art market.

Week 6: Where we are now

In our final session, we look at themes of feminism, gender politics, issues of race, and of non-European art in the work of artists such as Yayoi Kusama, Kehinde Wiley and activist collective, the Guerilla Girls. We reflect on changing approaches to how we view art; its democratisation via graffiti art and its most famous practitioner, Banksy, and how this impacts the art market. In the second half of this session, we will review our journey through the modern to the contemporary art world.

Lucrezia Walker was formerly Lay Canon at St Paul’s Cathedral with portfolio to the visual arts. She trained as an art historian, and in addition to her work for the National Gallery, she lectures for Tate, and the Royal Academy, London, and directs the art history programme of the University of North Carolina’s Study Abroad programme. She was former galleries correspondent for the Catholic weekly 'The Tablet'. Her research specialism is art in sacred spaces.

Can't make Wednesday evenings but don't want to miss out? No problem, you can watch again.

'Stories of art' sessions are recorded and made available to you for one week.

Recordings are available to participants via YouTube, where they can be watched with subtitles.

Each session lasts for 2 hours and includes a lecture, followed by a short break and further discussion.

Time will be allowed for questions and discussion via Q&A.

Handouts will be available via your National Gallery account on Tuesday mornings.

Optional homework is provided to help you prepare for the following week's session.

This is an online ticketed course hosted on Zoom. Please book a ticket to access the six-week course. Only one ticket can be booked per account.

You will be emailed an E-ticket with instructions on how to access the course via your National Gallery account. All course information including your Zoom link, weekly handouts, and recordings will be available here.

Your link will be valid for the duration of the module.

Booking after the course has started

You are welcome to join the module at any point during its six-week run. However, please note that you will only be able to see the recording from the previous session, as these are taken offline after one week.

From Pablo Picasso to Cornelia Parker and from the Young British Artists to contemporary global art contexts, discover avant-garde art of the 20th century and beyond

This is an online course, hosted on Zoom.

Please book a ticket to access this course. You will receive an E-ticket with instructions on how to access your online events, films and resources via your National Gallery account.

Please note, only one ticket can be booked per account. Bookings close one hour before the event.

Concessions are for full-time students, jobseekers, and disabled adults.