Eastlake’s legacy at the National Gallery does not stop with his acquisition record. His attempts to run the Gallery along professional lines with regard to its collection of pictures, their study and management were groundbreaking and set an example which has been followed ever since.

Indeed, many of the ideas which Eastlake instigated have flourished: his interest in examining and protecting the paintings has led over time to the creation of the Scientific and Conservation Departments; his catalogues foreshadowed the later National Gallery Schools Catalogues; and his desire to arrange the pictures in historical sequence still influences the arrangement of pictures in the permanent galleries of the National Gallery today.

Eastlake died during his continental trip of 1865, in Pisa on December 24. He was buried at Florence, but at the desire of the Royal Academy his body was returned to England and buried at Kensal Green cemetery.

Susanna Avery-Quash and Julie Sheldon, Art for the Nation: The Eastlakes and the Victorian Art World (National Gallery Company, 2011)

Portrait of a Young Man
Moretto da Brescia
This lavishly dressed sitter, wearing a coat lined with lynx or snow leopard fur, is the Brescian nobleman and humanist Fortunato Martinengo (1512–1552). Ancient gold and silver coins and a bronze oil lamp in the shape of a foot on the table allude to his scholarly interests, and perhaps also to...
Room 12
The Tailor ('Il Tagliapanni')
Giovanni Battista Moroni
This is one of Moroni’s most famous paintings. The dress and the style of the painting suggest that he made it late in his career, around 1570.The cloth merchant or tailor looks up at us, interrupted from his work. His cream and red costume contrasts with the black fabric marked with chalk lines...
Room 12
The Agony in the Garden
Garofalo
On the night before his crucifixion, Christ went to the Garden of Gethsemane at the foot of the Mount of Olives in Jerusalem. He said his prayers; his disciples Peter, John and James fell asleep. Christ asked God, if possible, to spare him the destiny that awaited him. Eventually Christ accepted...
Not on display
An Allegory with Venus and Cupid
Bronzino
This is one of Bronzino’s most complex and enigmatic paintings. It contains a tangle of moral messages, presented in a sexually explicit image. Venus, goddess of love, steals an arrow from her son Cupid’s quiver as she kisses him on the lips. Cupid fondles Venus‘ breast, his bare buttocks provoca...
Gallery G
Portrait of a Young Man
Andrea del Sarto
We have interrupted a young man reading; he turns to look over his shoulder at us. The unguarded look creates the impression that we are seeing him as he really is. His identity is uncertain, although he may be the stationer Lorenzo di Matteo Peri, whose family commissioned Andrea del Sarto’s Dis...
Room 8 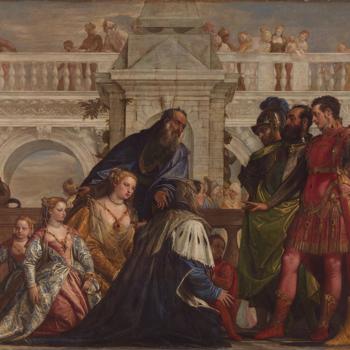